What's new:
You are at:Home»Portugal»Regions in Portugal»Dao»2005 Quinta da Ponte Pedrinha – yet a splendid Dão

After more than five weeks of just drinking Portuguese wines I though I should be thrilled to savor some French, German and Italian wines again, but I must confess I never got bored drinking table wines only originating from the western part of the Iberian peninsula.I’m still very much a Dãoist – actually even more after having picked up some new new names for me in Funchal – producers that just strengthens what I’ve believed for a while.  Forgive me Douro but Dão is my number one choice of region in Portugal!With great producers such as Alvaro Castro and Filipa Pato in the front line there are still a bunch of high quality producers following and which deserves your attention. The floral notes coming from the dominating grape varietal Touriga Nacional, the higher altitude where the vines are growing, still protected from the winds from the sea, and the backing up by Alfrocheiro Preto, Tinta Roriz and Jaen all are important elements when trying to understand the elegant, yet quite powerful wines from Dão. 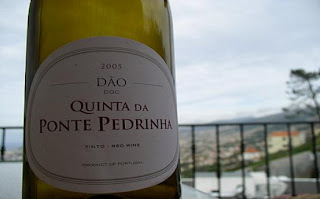 A new find and a real beauty, although still young, is the 2005 Quinta da Ponte Pedrinha! Dark red colour – impressive for a soon five year old wine. Popped thirty minutes before dinner the wine was quite stubborn in the beginning although Dão was most present. So, only one thing to do – drink veeery slowly!The reward came some hours later that evening when it exploded in floral, dark plums and wet rocks scents becoming a lovely glass. Still a young one with vivid dark fruit, a good mouth feel and brooding tannins. Long aftertaste where the topography says hello in terms of acidity. Should be at its best in two to three years but will keep longer.The 2005 Quinta da Ponte Pedrinha consists of Touriga Nacional, Alfrocheiro Preto and Jaen. Owned by Maria de Lourdes Mendes Oliva Nunes Osório, it is located in the Dão Region, between Seia and Gouveia, belonging to the same family since the 18th Century.This is Portugal at it’s best – mixing tradition with modern wine making. Love it!(2005 Quinta da Pedrinha, Dão, 90 p)