Hardly my average Wednesday sip and frankly, it shouldn’t be either. The 2006 The Armagh from Jim Barry is one of those wines which you should forget about for at least a decade – to give it the justice it deserves. Today it’s a bombardment of aromas and on the palate it delivers a vivid knock-out taste with an intensity one didn’t think was possible. 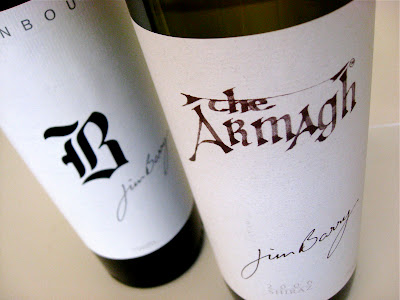 2006 was a very successful vintage, producing high quality wines in Clare Valley – South Australia. Conditions during the growing season were favorable with just the rain needed. January was quite hot but the vines were in such good condition that they didn’t suffer any damage. Harvesting consequently started early with most grapes picked by the end of March. The 2006 Armagh is a single varietal Shiraz which spent 17 months on new oak (mixed French and American oak).

To reach that understanding and being aware of the fact one might not fully enjoy the work put into a life long passion must be both frustrating and at the same time like reaching Nirvana. As a Madeira freak I can’t help but think of the similar situation they share. To make a vintage Madeira one never will be part of bottling, knowing it will be your children, or even children’s children carrying out the job, is the ultimate respect for a wine’s greatness and ageability.

Jim Barry passed away in 2004 leaving the property to be run by Peter Barry. Although Peter’s been the Managing Director since 1985 the loss of knowledge and understanding can never be underestimated.

The 2006 The Armagh is a monumental wine. Dark as the winter night. On the nose an explosion of blackberries, raspberries, meat, white pepper, humus, creme de cassis, eucalyptus and toasted oak. Still frightfully young but with a great aroma making you wonder where this will end. On the palate it’s bombastic with tons of raspberries, blackberries, spices, slightly scorched earth, licorice, new expensive oak and plum skin. Compact tannin structure, lovely and massive fruitiness and an intensity and aftertaste that doesn’t seem to end. A true masterpiece in big need of a decade of cellaring. Sure, you can drink it now but what’s the point – then the risk is you will end up with the impression of an over extracted wine – staying with your safe choices.

How do I know it will develop into a beauty? Well, I don’t but everything’s in place and I have a reference wine I always return to when in doubt of Aussie ageability – the 1980 Grange tasted at 25 years of age showed an elegance rivaling many of the classic wine regions of Europe. 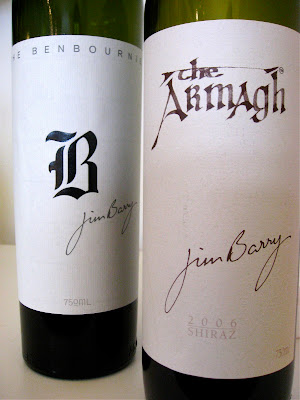 If you haven’t tasted a mature Aussie then consider another Jim Barry. The 2002 The Benbournie has just started showing its potential and although a Cabernet Sauvignon it is a great example of Clare Valley’s potential in delivering world class wines. The community of Benbournie (settled in 1853) was built on copper mining but the industry declined already at the turn of the century. All that remains today are a few ancient vines, fig- and almond trees. Hand harvested on the 18th of April. Thereafter crushed and destemmed into open fermenters. Fermented for seven days with daily racking and pumping over. Pressings were put back to the free-run and the wine was matured in new American oak for 14 months.

The 2002 The Benbournie Cabernet Sauvignon shows a dark saturated color with just a hint of maturity. Great concentration on the nose and yet its trademark seems to be elegance. Blackcurrants, eucalyptus, herbs, mushrooms, dark cherries and elegantly integrated oak showing coffee and vanilla. A beauty on the nose just starting to show maturity. Elegant and yet full bodied. Blackcurrants, mint, herbs provencale, mushrooms and soy sauce. Fine toasted oak with notes of nuts and coffee. Long lingering aftertaste with a pure minty blackcurrant. A great wine close to sheer world class. Still with many years ahead of evolvment.

Where do you live? Both wines tasted at Vingruppen, the Swedish importer of Jim Barry. For Swedish readers; links to the wines can be found here and here. In UK it can be found at Hailsham Cellars – £73 ex taxes. In Germany you can find mature Armagh’s at EUR 89,95. Vino Medico, also in Germany, retails the cult declared 2002 at EUR 158.

* Quote at Jim Barry’s Website. All information on the wines have been collected at the producer’s site.
** Pictures provided by Finare Vinare.