What's new:
You are at:Home»Portugal»Grape Varieties in Portugal»Alvarinho»A Portuguese Medley!
The following potpurri has, for some reason, not been published yet. The range of wines clearly shows the diversity of styles Portugal offer and although I don’t fancy it all, I can only ascertain that the country offers something for every palate!Are you ready? Here goes!
Sandra Tavares da Silva represents the very best from Portugal of today. The range of wines she produces clearly demonstrates her skills. Whether it is Pintas, Passadouro or as in this case – Quinta de Chocapalha, her parents property in Estremadura, it’s hard not to mention Sandra amongst the country’s most skillful and interesting winemakers.
The 6,000 bottles production of red Chocapalha is perhaps the one that impresses me most. Knowing Estremadura is a warm region she manages to deliver a Cabernet Sauvignon without suffering from the heat. The 2007 is gorgeous stuff; restrained and in need of aeration before revealing its herbaceous elegance. Not a blockbuster but – just an elegant glass of Sandra’s skills! 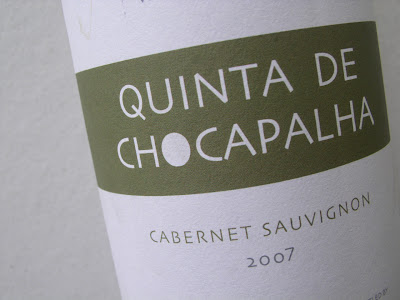 (2007 Quinta de Chocapalha Cabernet Sauvignon, Estremadura, 89-90 points)
My relation to Baga is split. There’s, for me, an often detected roughness that simply doesn’t match my preferences. However, I’m not giving up on Baga and the reason is mostly thanks to the duck – Luís Pato. 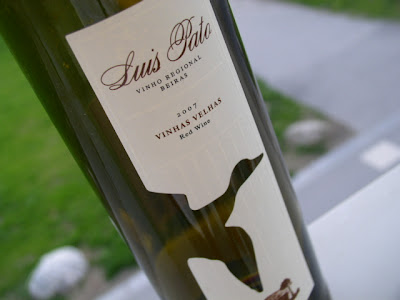 The 2007 Vinhas Velhas is perhaps just as good as the outstanding 2005 version. From vines averaging 45 years, the Baga delivers a darker note with scents of black cherries, warm earth, tobacco and spices. Probably thanks to fine and sweet grapes the pure fruit offers early drinking pleasure and the roughness – or rustic character – is not to be found. Still a style of wine that needs some adaptation though.
(2007 Vinhas Velhas, Luís Pato, 90-91 points) 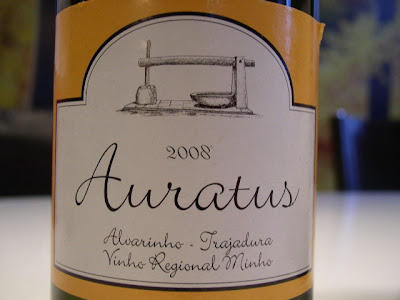 Heading north towards the Spanish border and the Vinho Verde region we find my favorite white wine producer in the whole of Portugal – Quinta do Feital and Marcial Dorado. The Spanyard’s normally mentioned for his splendid Dorado Alvarinho but don’t miss out on Auratus – a terrific blend of Alvarinho and Trajadura. The 2008’s purity and freshness together with a mineral driven character and green apple tickling acidity, are simply irresistible! Wan’t to fall in love with Vinho Verde? Let Auratus lead the way!
(2008 Auratus Alvarinho & Trajadura, Quinta do Feital, Minho, 88-89 points) 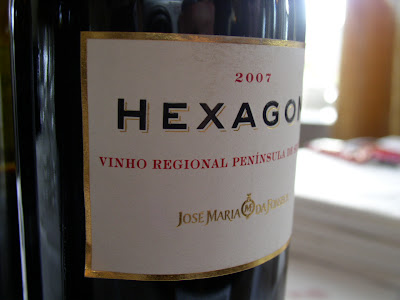 José Maria da Fonseca is the same as Periquita for most consumers. Some know there’s also a sweet wine by the name of Moscatel de Setubal emanating from the producer, but few knows they also aspire on the super premium wine offerings in Portugal. If they’re successful or not I’ll leave for others to judge – I’m however sceptical. I recently tasted the 2007 Hexagon and the 2007 J – an new prestige bottling from JMF. The Hexagon, consisting of Touriga nacional, Syrah, Trincadeira, Tinto Cão, Touriga Franca and Tannat, is an interesting wine with depth and good structure. Sadly, I find it over oaked and the six grapes mix makes it impossible to talk about any grape typicity. It is a really well made wine but at the price it demands I can easily find better buys. 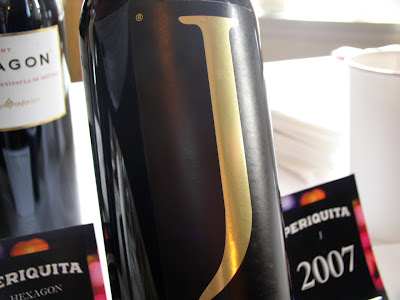 However, tasted with the new release next to it – the 2007 J – the Hexagon is almost restrained in its character. J is a powerful and for me, frightfully over oaked wine. I thought this style of wine almost were extinct! It clearly shows that many super premium bottlings in Portugal still are on the search for their style. Yes, the wine is well made and fruit, tannins and acidity are excellent. But why all the oak? For those of you loving dominating notes of coffee, chocolate and vanilla – you will love this!
(2007 Hexagon, José Maria da Fonseca, 91-92 points)
(2007 J, José Maria da Fonseca, 90-91 points) 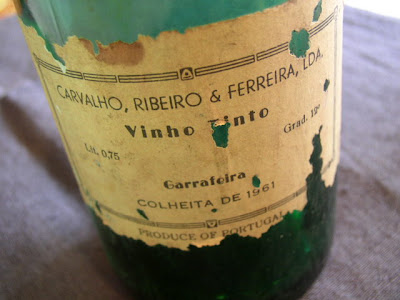 I’ve been lucky with some older bottlings from Carvalho, Ribeiro & Ferreira. Sadly, the 1961 Garrafeira wasn’t one of those. Good yes, but too dry leaving you with an astringent feel after having tasted the wine. Bottles in pristine condition from the 1950’s have been excellent and perhaps this was just a slightly off-bottle? Don’t know….anyone else with experience of CRF?
(1961 Garrafeira, Carvalho, Ribeiro & Ferreira, 86-87 points) 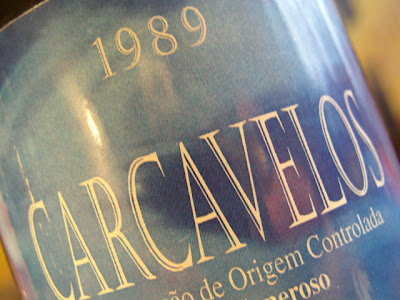 Urbanisation or just out of fashion? Perhaps a combination, sadly Carcavelos barely exists anymore. Once a celebrated fortified wine – today a forgotten one that most only will read about. But then there’s the driving spirits like Quinta dos Pesos who keep the tradition alive! Their 1989 Carcavelos is an interesting wine that reminds me a bit of the oxidation Madeira gets but adds the tawny style of a Port wine. More acidity than a Douro and also more floral. Sweeter? Don’t know but the impression when tasting is yes. Not a memorable wine but very enjoyable and worthy of your support!

N.B. Wan’t to learn more about Carcavelos? Then read the two articles by Reign of Terroir. Fantastic stuff!