What's new:
You are at:Home»Argentina»Am I changing palate?

Think about it. The wines that started your love affaire with Bacchus; are they still amongst your favourites today? Or, the type of wines you adored five years ago; are they just as praised today? And what about those left overs in your cellar; are they just lying there, waiting for perfection, or have you simply stopped liking them?

My palate changes; no doubt. It all started with Italy roughly 15 years ago, continued with France, Germany, some back and forth trips around the globe, Portugal and then back in France. Although a fine Bordeaux probably always will be an essential part of my wine drinking I can not say the same about all types of wine.

For many years I totally concentrated on Europe having prejudices about wine countries such as Australia, Chile or Argentina. Even if I did taste the very best from those countries, young and with maturity, I never really got a kick out of them. And why drink something that doesn’t set you on fire? Is it wrong to be an europhile?

Now, my palate is not a static instrument, but without really giving it any thought, I have found myself lately drinking wines from New Zealand, Argentina and Chile. And like them – a lot! If my palate has changed or the wine producers has chosen new paths to walk I can not with certainty say, although the truth probably lies in between.

I think I have a potential love affaire coming up – with Malbec. Lately I’ve had a few that not only were impeccably made wines; they were also filled with personality and, the term European wine producers believe is their trademark; terroir. 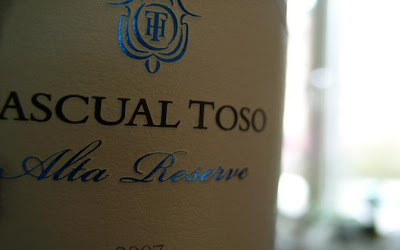 Let’s take an example. The 2007 Pascual Toso Alta Reserve Malbec from the region of Luján de Cuyo in Argentina. The area is on the same altitude as Santiago in Chile and the grapes for the Alta Reserve has been given a year on French barriques.

Some hours in a decanter the wine still showed a youthful character with three or four years of evolution ahead. The black fruit (dark cherries, currant and blackberries) is well inegrated with the spicy oak, Valrhona, lead pencil and a scent of dusty summer road. It’s big and yet not. Did I mention it was served blind and I was guessing South of France or Northern Spain?

In the mouth its leaning towards a fullbodied style with gorgeous fruit, backed up by mature tannins and an acidity sending me to the southern parts of France. Fine integrated oak, blackberries, dark chocolate, lead pencil and sweet licorice. Long finish with a finale of wet earth and pure blackberry essence. I love it and I am in Argentina!

First of all; having tasted quite a lot of Cahors Malbec the last year I have not run in to any wine from the Cot that has the same class as this one. At 22 euro’s! So, am I in a phase again – changing palate? I don’t know but when it comes to Argentinian Malbec they, I believe, are superior to the Cahors ones and the French have to struggle real hard to reach the same level.