Last Wednesday I went to an Amarone tasting – at least those wines were the main attraction – and then I got sick. The last week I’ve spent in a state of fuzziness with a double eye infection accompanied by a nasty tonsillitis. First now I am slowly starting to see the light again – and my keyboard.

Now, I was an Amarone skeptic before the tasting – how am I supposed to be positive now when it sent me right to illness! Spending the first days condemning the stupid wines from Veneto and accusing them for being responsible for my illness, I slowly started to regain some kind of sense realizing the incubation period of a tonsillitis is quite long. No, I wasn’t poisoned or infected by evil Amarone producers who was after me and no, I don’t dislike Amarone that much.

What annoys me though is the fact that Amarone has a status amongst the average wine drinker as fine wine, something you serve on special occasions and only buy for those reasons. Much like Champagne many are the producers who benefit enormously on the ‘lack of knowledge’-fact amongst the consumers and pump out milions of liters of crappy wine titled Amarone. That annoys me a lot when you can find an average wine at 20 euro’s which only resemblance with Amarone is it higher alcohol. The sad part is that people buys them but few takes the next step and shops a wine worthy by the name of Amarone. Because the good ones are out there; oh, yes they are! 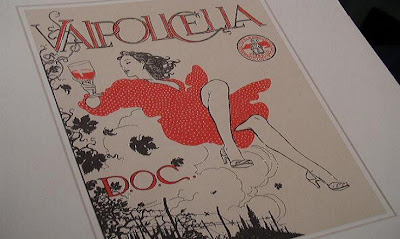 To celebrate their newly awarded DOCG status the Consorzio Valpolicella has set out for a tour promoting their wines at the very best of times. 16 producers joined the tour; some renowned names but most of them were probably just as well on the search for agents. Last year the production stats for Amarone ended at 9 million bottles. To the context put an estimated value of the bottles of 108 millions Euro. Another 40 millions bottles of Valpolicella, Classico or not, were produced with an estimated value of 76 millions Euro. Who doesn’t want to be an Amaroneproducer!

With an increasing demand and money to make, the vineyards of course touches price levels one thought was exclusive for regions such as Bordeaux. At Cantine Gerardo Cesari I am told that the best sites now has reached price tags of 700.000 Euros per hectare! No wonder greed and less scrupulous producers turned from Bacchus to Plutus!

50 wines offered to taste. I chose to try around 30 of them. Valpolicella, Superiore, Ripasso, Amarone and Recioto were represented.

Starting in the most food friendly end, the ordinary Valpolicella’s and Superiore’s there was one wine that stood out. Not that it is the best Valpolicella I’ve tasted, no, it was simply an adorable wine with some depth and minerality, fine mouthwatering acidity and a restrained cherry, bitter almond taste. The 2008 Valpolicella Vigneti di Torbe Classico Superiore from Domini Veneti (Cantina Valpolicella Negrar) was my first choice of splendid everyday wine (89 p).

Also, the 2008 Valpolicella Superiore from Azienda Agricola Musella deserves mentioning. A modern approach to Valpolicella and with its fresh and delicious cherries and spices on the nose, mature tannins and fine acidity in the taste, it is easy to like the wine (88 p).

Ripasso wines I don’t bother referring to. For me they are just like Mark Twain’s quote on golf about which he says: a good walk spoilt. Why spoil a good Valpolicella which has its own character? Oh, it didn’t have any? Ok, so that was why you put in the rests from the Amarone fermentation in the wine and took benefit of now being able to charge even more for an uninspired wine? Ripasso is a mean but successful way of simply making money and I won’t contribute to it.

Most producers attending concentrated on their Amarone wines and here the quality were truly divided. Some personal, well made wines which I would love to stock and then the ordinary wines not saying much. Best in show:

Many Amarone wines gave the impression not knowing which way to walk. Some traditional in a negative way with too much nail varnish and overripe red apples, some totally lacking acidity, some only had acidity and then there were the oxidized style. On the other scale stood the modernists that hoped expensive barrique’s would do the job but Amarone and too much new oak is a really nasty match.

Finally the Recioto wines which only stand for 400.000 bottles a year. A good Recioto della Valpolicella is a joy to taste and I can easily say I was really impressed by at least three of them attending. Best in show:

2004 Recioto della Valpolicella, Musella (94 p). Best wine this evening. What pure fruit, what great restrained style and also without the nail varnish. Some acidity and 15% which is at least 2% more than normal in a recioto. When asked why Musella simply said they like the type of wine to still be fresh and not so sweet. So right!

2007 Fiorato Recioto della Valpolicella, Tommasi (90 p). Not the best but a wine that delivers a lot at a most reasonable price deserves mentioning. On the traditional style so if you’re not in to overripe apples and varnish then don’t buy. Still a nice wine with some concentration and pure fruit.

2006 Recioto della Valpolicella, Azienda Le Tobele (92 p). An elegant wine reminding me of Musella but then sweeter. Still it manages to balance the sweet dark cherry fruit with acidity. I like it a lot. Well done.

2008 Recioto della Valpolicella, Domini Veneti (93 p). Dark as the winter night, this one is both traditional and modern. The old style is represented in nail varnish and overripe red apples, but then there’s a fine balancing acidity to the sweetness, mature dark berries and a lovely clean finish. Needs time.

A short resume: Amarone is expensive and will get even more so in the coming years. Therefore, for the interested, it should almost be treated like Burgundy; know your producer, because the probability one will end up with an average wine at a price anything but average is higher here than many other places. On the other side; don’t get frightened by what I write because when Amarone is good it is worth the search. Finally, keep in mind – some years cellared doesn’t exactly make your Amarone bad.