My guest blogger Markus Stolz yesterday presented Christos Kokkalis and his winery in the western Peloponnesos. Today it’s my turn to present one of my coolest finds this year – the 2008 Trilogia from Christos!

Writing about a wine that many  never will get the chance to taste – not because it’s hysterically expensive, no – but due to the fact only 6,000 bottles are produced yearly, makes me a bit insecure. There’s no interest in it for me bragging like ‘Hey look, I’m drinking a wine you can’t find – or afford!’ because then I could only write about the top names of France which cost just as much a bottle like the entire collection of my monthly bills. And hence write a post maybe twice a year…. 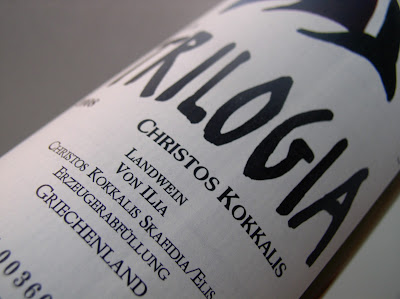 No, Trilogia costs 30 Euro’s in Germany but sadly many of my readers don’t have access to the German market. To you who hasn’t; tell your wine retailer about Christos Kokkalis Trilogia! This is without doubt a great Greek!

Christos started the production of Trilogia in 1997. Working as a pharmacist for a big part of his life in Germany , he also took some wine classes to build up his theoretical skills. Then, in the 90’s he purchased a small vineyard in the western Peloponessos and started planting his Cabernet’s – turning the theoretical knowledge into real stuff. It didn’t take long before Christos started to receive acknowledgment for what he was doing and I can’t help but wonder how much a winemaker actually is an artist or just an educated winemaker?

Christos clearly demonstrates in his wine that he’s more than a pharmacist. He’s an artist as well! I guess some just has that special ‘je ne sais quoi’ feeling when it comes to producing great wines – with or without prior training.

I popped a 2008 Trilogia – a wine entirely based on Cabernet Sauvignon. Quick sip to check status: Oh my, what do we have here! This is good stuff!

Then keeping my fingers away the wine was allowed to breathe, and although I was aware of this being way too young, I needed to taste and check what was in the bottle.

Christos vineyards are organically farmed and he treats the Trilogia with great respect; no fining or filtration, low yields and no water irrigation. The wine spends 18 months on French and American oak and here my first wandering starts.

Tasting the wine I am immediately flattered by the almost Californian air this wine sends out. Still, there’s a minerality I haven’t bumped into before, a spiciness sending me to the Rhone Valley and then there’s this fresh mint scent reminding me of great Medoc Cabernet Sauvignon. The barrique is well integrated and not at all dominating, although they are present with the scents of ground coffe, dark chocolate and a slight vanilla note. It’s the floral, humus, blackcurrants, blueberries, mint and spices that caughts my attention. It’s dense and has that feeling of a high class wine on the nose. Still in its primary phase but I tell you, it doesn’t hurt to drink – unless you’re afraid of tannins because the 2008’s tannin structure knocks you!

On the palate it is, besides the impressive tannins, a dry wine full of sundrenched blackcurrants and blueberries with floral notes, oak, bay leafs and fresh tobacco. It has plenty of fruit to cope with the tannins and the acidity is in harmony with the other components. Long and pure aftertaste with a floral touch to it.

This I tell you, is worth seeking out. Not only because it is a great wine and has at least a decade or 15 years ahead of cellaring, but also because it might be the best Greek red you’ve ever had. Trilogia is the perfect example of a wine that clearly shows that high quality and personal wines emanates from all over the world today. I guess we will, in a decade or two, talk about Peloponessos characteristics in wines, but if you already now wants to discover it then pick up a Trilogia.