Ahr is the world’s most northern wine region dominated by a red grape and if it weren’t for the steep south facing slopes, protection from the surrounding Eifel mountains and the heat in the valleys, it wouldn’t be possible to produce some of Germany’s best Spätburgunder a k a Pinot Noir. And if you thought that the Mosel had the most steep vineyards in the world you haven’t seen the Ahr yet!

So, where can i find Ahr? The vineyards centers on a 15-mile stretch of the Ahr River, which flows into the Rhine just north of Koblenz. With its 550 hectares cultivated with vines Ahr is amongst the smallest wine regions in Germany. But few can compete with the Pinot Noir’s of such great producers as Adeneuer, Deutzerhof, Jean Stodden, and Meyer-Näkel.

Thanks to the topography the Ahr benefits from an almost mediterranean climate which explains the choice of Spätburgunder that stands for almost 90% of the grapes cultivated in Ahr. Dernau is the wine village number one followed by Neuenahr, Ahrweiler and Walporzheim. Here you will find top Grand cru sites such as Pfarrwingert, Kräuterberg and Sonnenberg. 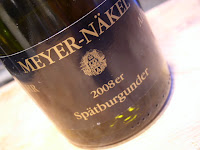 In Dernau you will also find the today world famous weingut of Meyer-Näkel. Over a night the Meyer-Näkel’s were on everyone’s mind after the 2005 Dernauer Pfarrwingert Grosses Gewächs won the Decanter Award as one of the world’s best Pinot Noir’s.

But with a small production, the co-operatives stand for a major part of the wines produced in Ahr, Meyer-Näkel’s wines are just like Adeneuer’s, Jean Stodden’s and Deutzerhof’s tough to find. Most are consumed within the country.

In the Apollinaris Meyer serie you will find the 2008 Spätburgunder from Meyer-Näkel in Ahr. Retailed at around EUR 13 in Germany the wine shows the classic transparent colour of a Pinot Noir. With scents of cherries, strawberries, wet earth, a hint of oaky spiciness and saddle leather, it provides the traditional Pinot Noir fan with all the components wished for in the grape. Its perfumed nose fills the burgundy glass and one can’t help raising the expectations when about to taste it!

Considering this is one of Meyer-Näkel’s more simple wines it provides excellent grape typicity and is definitely hard to beat for wines originating from Burgundy. Six months on oak the wine hints just a touch of it and shows a round and terroir driven taste with just a bit of concentration and mature tannins. Fine acidity and no residual sugar in the taste. Blueberries and strawberries with an earthy and nicely integrated oakiness and some length. 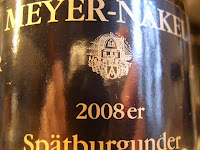 A great wine providing immediate pleasure and for short term cellaring. Burgundy; you are hereby warned! Ahrgh, this is good!

N.B. I like dark labels with golden text but my camera disagree – or deliberately steals the show which you can see in the picture above….