Tired of reading about Chateauneuf-du-Pape and the 2007 vintage? Sure it’s a great vintage but be honest to yourself; if the kind of wine produced in 2007 is what you’re searching for in a pope wine, then why haven’t you bought any aussie Grenache before?

“I think this is the start of a beautiful friendship” would be a nice quote to start with but no; I’ve admired the wines from Roman Bratasiuk and Clarendon Hills for more than a decade now and this is already a friendship! I still remember our first date back in 1998. It was me and the 1995 Blewitt Springs Grenache and it was love at first sight. The purity of the wine was of a kind I’ve never encountered before in a Grenache based wine. Since then, I’ve tasted my way through the different labels of Clarendon Hills and although I’m probably supposed to say the Astralis kicks ass I’m a fan of Roman’s Grenache wines. 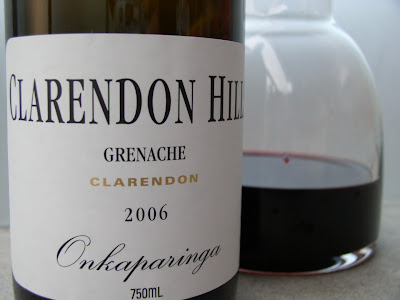 Blewitt Springs, Hickinbotham, Kangarilla and the first vintage I’ve now had the chance to check out of the Onkaparinga – all are impressive wines from just as cool vineyards. All planted during the 1920’s when wine in many parts of the world wasn’t exactly the number one thing to get along with.

Onkaparinga meaning ‘local region’ is a newcomer to Roman’s Grenache empire. Ok, empire is not the most suitable phrase to use but the fact is Clarendon Hills has few opponents when it comes to mastering the sensitive Grenache grape. Planted in 1928 the Onkaparinga in McLaren Vale is located 250 meters above sea level and the bush vine vineyard is one of the most highly-elevated regions of Blewitt Springs.

So, get to the point you think; is he going to claim the Clarendon Hills are superior to a Chateauneuf-du-Pape?

Well, that I leave to you to decide but my admiration for Roman Bratasik’s wines has now been ongoing for 12 years and for me that is more than the Rhone producers got so far. Onkaparinga is a dry grown vineyard in compact, iron stone/gravelly soils. It ripens 2-3 weeks later than the lower McLaren Vale vines and Roman went for hand picking in several passes to ensure optimal ripeness.

6,300 bottles were made of the 2006 Onkaparinga. Using wild yeast, 1-5 years old French oak, ah what the….just drink the wine and skip all the facts! This is a truly great glass although it’s not a pop’n pour. I decanted for six hours and managed to pick up from kindergarten, go to the library with the kids, buy a lovely club steak, pick up a case of wine, listen to the desperate election workers trying to catch my vote (sorry guys, I’ve made up my mind), talk with mum, start a laundry, prepare food for the family – before pouring those most wished-for Grenache drops! Man, was it worth the wait! 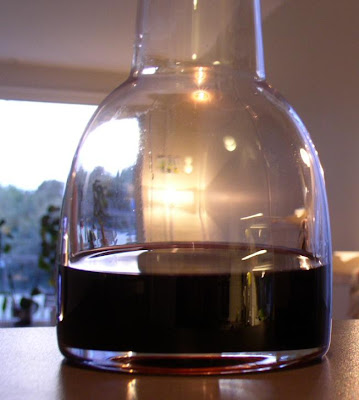 2006 Onkaparinga Grenache between 6 and 9 hours on the decanter:

Starting to show it’s beauty with dark cherries, plums, violets and roses, humus, spices, chocolate and oak. Strangely, one would probably anticipate a monster on the nose but it’s not that dissimilar from a super-premium 2007 C9dP.

On the palate it combines brutal power with elegance, how odd it may sound. Kirsch, blackberries, chocoloate, humus and licorice when it hits you but then some elegant hints of roses which makes you not writing ‘elephant in a china store’. Mature fruit, good underlying tannins and an awesome knock out taste. Have you tasted the 2007 Mas de Boislauzon Quet? It’s not as grand but follows the same recipe. Lovely floral aftertaste and how strange it may sound; this is easy drinking and the lot disappeared.

If you’re one of those patient who actually manages to cellar your wines then the 2006 should probably evolve for a decade. Of course, your personal taste decides but I would probably, when comparing to the older Blewitt Springs I’ve had, drink it around 2012-2015. Fruitiness in a Grenache is essential to me you know..