I like them both and find it hard to pick a favourite. Should I though need to, it will be the Klumpp. Can’t he proof read the postings before publishing them you think, but the fact is – they’re named Weingut Klumpp. Located in Baden, in Bruchsal, the organic winery represented 2008 in a most humble battle vs the Weingut Dr. Heger’s Merdinger Bühl, also from Baden, which threw in a 2007. Grape? Spätburgunder. Price tag? 10 Euro’s.

In my search for a good quality Pinot in the lower end of the price scale, just an everyday life drink, I quickly turned away from Burgundy and gave Germany all my attention. Ahr, Württemberg, Pfalz, Baden and Franken has been the main focus and 2007 and 2008 the vintages sampled. In general the impression is mainly positive since few wines has disappointed.

The, in many ways, extra ordinary vintage of 2007 has actually given the producers a tougher time turning out good basic wines since they’d to challenge substantial amounts of oechsle. Some has balanced it excellently, for example Fritz Becker in Pfalz, but the producers turning out too alcoholic and slightly bitter wines are also represented. So, in fact, 2008 has in many ways proven to be even better for the lower end wines on the Spätburgunder grape in Germany since they have a more natural low alcohol, and better balancing acidity.

2007 Merdinger Bühl: The for Spätburgunder typical pale light red colour. The bouquet is quite mature with crushed wild strawberries, leather, wet earth and a slight compost feel. Classic but maybe lacking a bit presence. In the mouth the acidity rules, just the way we like it, and the sweet mature scents of strawberries, minerals, compost and a slightly floral note, is easy to like. Maybe struggling against some sweetness but no bitterness and alcohol over weight in this one. No long finish, but refreshing (86 p). 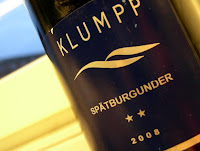 2008 Klumpp: Impressive colour for a Pinot, no resemblance at all the the Heger bottle. The fragrance’s are also darker with notes of blue berries, roses, herbs and a smoky touch. Develops nicely in the glass. No doubt it is a Pinot but not the classich funky feel to it. Very refreshing and balanced taste with floral notes, raspberries and blueberries  in a cooler style then the Merdinger (87 p).

Just below ten euro’s a bottle in Germany they are both great buys and I can’t understand why they don’t have a bigger audience abroad than they have. Burgundy have serious issues in competing both when price and quality are discussed on this level but seems to be more popular nonetheless. Perhaps the smaller productions is one explanation but in the end it is probably just consumers repetitive behaviour and suspiciousness that are the logic explanations.

Do yourself a favour; start drinking German Pinot. Slightly chilled it is the perfect summer drink!