I don’t know if it’s the high altitude, the ungrafted vines or simply just a matter of personal preferences? When I long for a top class Malbec it’s Argentina who delivers. Cahors in all its glory and long history seldomly appeal to my taste buds. And also; if there’s any wine to taste right after the quartet of divine Cote-Rotie’s from E.Guigal, it got to be Argentinian Malbec! 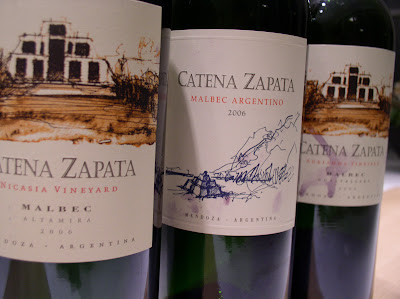 Catena Zapata are probably together with Achaval-Ferrer providing the consumer with the very best of Malbec’s. Just as with young Malbec from Cahors they’re extremely tough to judge in their youth. The fruitiness can be overwhelming and make it difficult to see the matrix in ten years. I confess, I’m not a Neo, but the 2006 Catena Zapata bottles tasted, were popped 24 hours earlier and perhaps that did the trick – never have I felt such mineral driven character in young Argentinian Malbec’s! 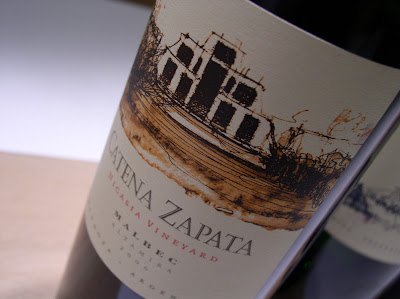 A young vineyard planted in 1996 and a part of the Lot 1 in the Altamira Vineyard. On its own roots – hey, we’re in Argentina -and located 1,180 meters above sea level. The Nicasia vines goes through it all; shoot removals, cluster thinning, strict water restriction and leaf thinning before harvest. In 2006 that lead to yields of 2,5 tons per hectare, and for those of you thirsting for more details that translates into a yield of 625 grams per plant (considering the plantation density is 4,000 plants per hectare).

Harvest started on the 18th of April which resulted in an 86 day long window from veraison to harvest for the Malbec to enjoy. A high polyphenolic accumulation in other words. Wow, do the winemaker Alejandro Vigil, handle that beautiful in the wine or not!

No need to talk about color on the Catena Zapata trilogy – I can easily ascertain you they’re all dark as the night. The Nicasia is a bombardment of wet rocks, dark berries, tobacco, sweet root, cherry stones and toasted oak. The high altitude grown grapes are well expressed in the bouquet. Although intense it still has elegance as its trademark on the nose. The taste is intense with huge fruit concentration and massive tannins that are yet well hidden. Boysenberries, licorice, wet rocks and a violet feeling. Toasty oak and a dry feeling to the wine makes this easy to like. Long, intense aftertaste with the purest fruit feel you can imagine.

As always with these wines, they are judged by the style they show when young. I mean, how many would think of the idea to put a Nicasia in the cellar for ten years? Please, consider it! 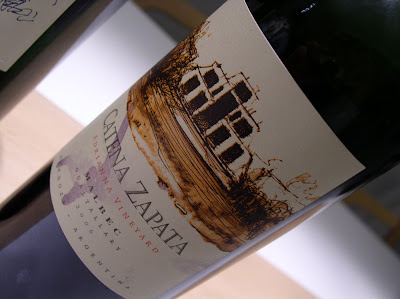 Moving on to the 2006 Adrianna and also moving upwards, pinnacle wise and topographically speaking. We’re at 1500 meters above sea level and if the high altitude was evident in the Nicasia this wines has an air of coolness all over it. The Adrianna Vineyard was planted in 1992. On its own roots yes and if the yields were low on Nicasia we’re even down on 570 grams per plant now! Also, add three extra days of maturation on the vines.

Oozing of wet rocks and earth! Boysenberries, freshly crushed berries, cherry stones, floral scents and nicely integrated toasted oak. What elegance! What intensity! Just like the Nicasia it has that dry feeling to it although the fruit is sweet. Mineral driven taste, tobacco, ground coffe, violets and dark berries. Lovely presence and delineation in this wine and for me it is a pinnacle up from the Nicasia. Huge tannins, fine acidity and fruit for a long life. 18 months on new oak. Just like the previous ‘LaLaLa’ wines I can only ask; where did that go? Long, long finish. Best in show if you ask me. Love it! 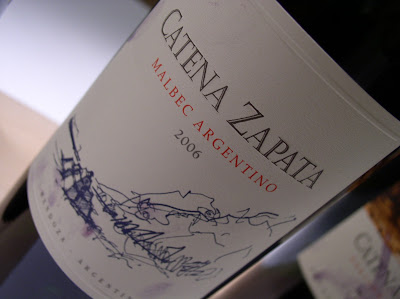 So, what happens if you take some of the Malbec’s from Nicasia and some from the Adrianna? Then you have the Argentino – somewhat of a super premium cuvee from Catena Zapata. Although yet a majestic piece adding complexity compared to the single vineyard wines, I can’t help but think this is a bit too styled for my taste. The personality of Nicasia and Adrianna speaks directly to my terroirist preferences and I don’t get as excited over Argentino. Still – and this is important to state – it’s a wine with an extra dimension and if I’d try it again in a decade I would perhaps change my mind and prefer it to the other.

More toasted oak in the bouquet; dark chocolate and ground coffee. Boysenberries, tobacco, violets, licorice and spices. More complex bouquet which probably will evolve beautiful over the years. Huge concentration – yet elegant. On the palate it’s massive with sweet mature berries; blueberries, boysenberries and plum skin, violets, licorice and a wet rocks feel to it.

Toasted oak adding vanilla and dark chocolate and coffee notes. Impressive tannin structure and long, long finish. After having the Nicasia and Adrianna you react on the sweeter taste to this one. Checking residual sugar it also confirms what I suspected; Argentino has 4,5 grams of residual sugar per liter and the other two is at 2 grams. Is this what makes me split? After all; great Bordeaux in need of decades also had sweetness to them…..

A quartet of Guigal super premium wines followed up by a Catena Zapata race were truly memorable. But it didn’t stop there. A final Malbec was popped and poured as a good comparison. The 2007 Luca Malbec from Uco Valley is a project of Laura Catena’s, daughter of Nicolas Catena. Another style of Malbec compared to the Catena Zapata’s and also from older vines. If I’ve understood it correct the vineyards aren’t owned by Catena but contracted. This one’s from more than 40 years old ungrafted vines in the Uco Vally in Mendoza. A year on 60% new French oak.

Now, this is totally different in style! It’s medicinal, leathery, floral, herbaceous and more blackcurranty on the nose – reminding more of a European wine. Wonder where I’d place this one in a blind tasting? The funky nose is quite seductive and perhaps a lesser vintage than the 2006 can explain the style?

Until now, hope to see you in a decade Nicasia, Adrianna and Argentino!

N.B.2. For a better understanding of the vineyard’s location, check out the map here.

N.B.3. Photographs on the Nicasia and Adrianna vineyards.