What's new:
You are at:Home»France»Regions in France»Beaujolais»Weekly reflections of a wine lover – #59
It’s been a while. Actually a bit more than that. A gap of 217 days between my weekly reflections wasn’t my intention but as with most things in life you come to that certain point when it’s not funny anymore. I’ve been there for a while now. Although writing is my opium I’ve reached that moment when I’m wondering why my muse has abandoned me. Fine, I’ll do it myself then I thought – and while brainstorming ideas for new blog material approaches I suddenly realized my old weekly newsletter! It was great to write and actually my most popular feature amongst you readers. So therefore I stopped writing it. Duh?
Well, read it or not; my weekly newsletter is back on track and will be a part of the ‘new’ features on my blog trilogy. Here you go – #59!
*
So, why this blog depression? No worries if you like what I’m doing. I just love to exaggerate. It all started with me being bored of just delivering tasting notes and introductions to wine producers. That resulted in more extended postings formed as interviews with people I admire. Fun to write and hopefully fun to read. At least the stats gave some indication that I was on the right track. Besides, it generates a direct contact with the producer and gives me the necessary kick. So, inspired to the maximum I started brainstorming ideas and from now on I will do my very best to deliver a mix of stories on my blogs. From my very own thoughts that sometimes might become off-topic or which simply just wants to inspire or raise a thought, to presentations of people that deserve some attention for what they’re doing.
For me, a blog/blog writer is all about trying to be dynamic and not afraid of change. New discoveries arise along the way all the time and also new preferences. Hopefully you, dear reader, will stay static though and continue reading Mise en bouteille!
*
I like the fall. Not when it’s only windy and plenty of rain no, but the changing of colors are just as nice as the springtime’s bud breaking. Besides, some wines do taste better when the cold weather hits us and when it’s really, really nasty outside it’s a comfort knowing one can pop bottled sunshine and instantly be transferred to the summertime! 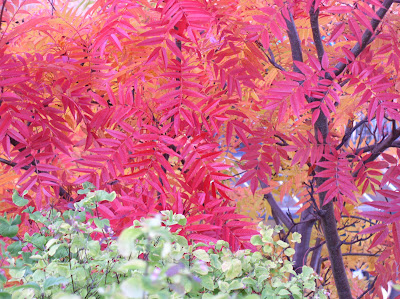 I admit it. I drink Madeira all year around. However, with the forests filled with fungus all I can think of is…..Madeira! A creamy soup with mushrooms and a glass of either a Sercial, Verdelho or a dryer style of Terrantez is an unmatched pairing. Can I be picky? Make sure the Madeira has some age to it – then the combination is unrivalled.
If I may stretch my humbleness for a moment I have over the years developed a quite tasty mushroom soup recipe. Do you want it then let me know!
*
It’s so sad to read that Marcel Lapierre has passed away. Especially a region like Beaujolais needs a person like Marcel. Someone with integrity and passion showing there’s more to the region than lawsuits.
There’s been a lot of negative attention surrounding Beaujolais the last 10 years. From court cases where the producers sued a local newspaper for the denigration of French products (Yes, such a law exists in France!), attempts of mixing a superior vintage with a lesser one to the last case in 2007 when 600 tonnes of sugar were bought by Beaujolais producers. And according to the lawsuit the sugar wasn’t for the daily coffee or to bake cakes, but used for illegal chaptalization.

Besides the time spent in court rooms, the Beaujolais’ has themselves partly to blame and especially that third Thursday every November. ‘Le Beaujolais nouveau est arrivé!’ is a marketing campaign of great success and a schoolbook example of how you keep your inventory as short time as possible.

Having all this in mind, it’s easy to forget that there are the likes of Marcel Lapierre in Beaujolais. Furthermore, 2009 may be the very best vintage in decades and with all negative media attention the last 10 years, prices remain extremely low for the quality given. I love Gamay and can’t miss out on an opportunity like this. When you get Cru Beaujolais wines from terroir driven estates, some even from single vineyards and 70-80 years old vines at £10-15 a bottle, well, what are you waiting for then?

I’ve bought a mixed case of 2009 to taste through and will present one in the newsletter each week. Forget about all in the past and have a 2009. Believe me, they might be the very best buys France has to offer at the moment!
*
Beaujolais it is. First out is the 2009 Fleurie La Roilette Vieilles Vignes from Domaine Metrat. A small domaine run by Sylvain Métrat and his father-in-law Michel Chevalier. The old vines surrounds the winery and there is a layer of clay on top of the granite soil resulting in a, for many, atypical Fleurie. The Gamay grapes are hand-harvested and has then undergone a short fermentation of seven days (whole bunch fermentation). Then aged in wooden casks for 6-9 months. 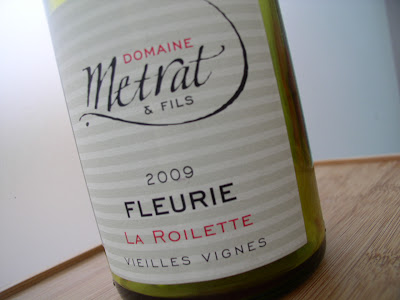 Seductive nose with hints of cherries, rasberrry’s, oozing mineral, lead pencil, floral notes and sweet root. Man, I love this nose. On the palate the charming continues. Sweet berries, fine tickling acidity and a fat Gamay feel to it which is even more seductive at 14 C serving temperature. Floral and lead pencil again. Just a hint of tannins giving that needed structure. Long taste. A great start on my 12 bottles 2009 journey around Beaujolais! (91-92 points, bought at BBR)

Next newsletter; perhaps the best ordinary Beaujoalis bottling I’ve had!

*
Can I change my mind? I normally never write a post on a wine I’ve found disappointing. At least not if I’ve only tasted one bottle. It’s not fair to the producer, the importer, myself or the reader. So much can go wrong. I could just be having one of those days, had the wine at the wrong temperature, savoured it from a crappy glass, tasted a slightly flaw bottle or had a cold coming. Perhaps the wine needed aeration and I wasn’t possible to give it the time.

It’s easy to act a critic but being one comes with both responsibility and respect for the people that is affected. If you’re going to criticize the wine then make sure you are really sure. 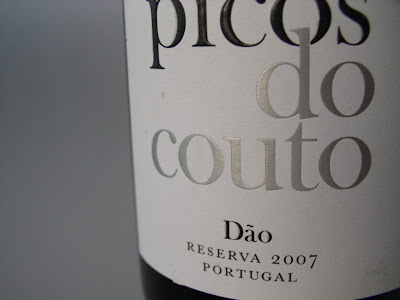 I’ve had the 2007 Picos do Couto from FTP Vinhos earlier this year. Nope, you won’t find a post on it but I did leave a note somewhere to a fellow blogger which had also tasted the wine and also showed a bit of disappointment. Not that the Dão wine was bad, not at all, just anonymous and a bit dull.

Thinking back I should have known better. The glasses weren’t optimal and the fact it was a pop’n pour should be enough to keep my mouth shut. Or at least my writing. Picos do Couto deserves a new chance and since I consider myself a Dãoist I know these bottles need time. Touriga Nacional can be a sturdy queen but when awakened she’s shows her royal blood! Bottle opened and put in decanter for several hours. Then poured in Burgundy glasses which I prefer having my Dão served in.

Oops! Is this really the same wine as I had some months ago? Filled with dark berries, the classic violet note, ground coffee, dark chocolate and humus. Splendid concentration on the nose and quite elegant. On the palate it shows good grip, fine tannins and that to-die-for Dão acidity. Sweet liqorice, blackberries, toasted oak and a floral scent. Quite long taste and clearly a wine with some ageing possibilities, say four or five years from now. just kept on delivering during the evening.

From now on, i will try to learn to keep my mouth shut if i don’t follow my own rules. Retailing in Sweden at a most fair price. (87-88 points)

*
I obviously have good friends. Friends that also appreciate our company and know my preferences. But what’s funny is that with two weeks interval I was poured first a rare 2003 Moscato Rosa from Cantina Tramin in Südtirol, Alto Adige (91-92 points) and then at another dinner, a just as rare 1995 Gewurztraminer from J. Hofstätter in Südtirol (92-93 points)! 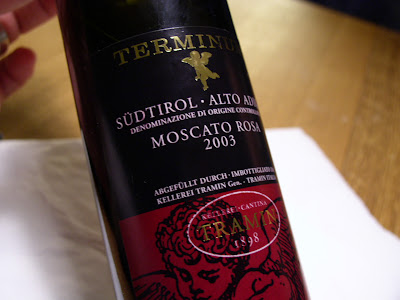 My fascination over perfumed wines are probably related to age. I’m 38 now and ten years ago I would have rejected the wines as old peoples drink. Well, it’s time to wake up. Either I’m getting old or I just wasn’t prepared for the floral and perfumed scents.

What struck me most with the Südtirol wines was that they were so alive and kickin’. Both served with ice-cream rivaling Tokaji as my preferred choice to creamy vanilla ice.

*
Why does it have to differ so between transport companies policies? One shows great flexibility and quickly changes delivery address to the job when I can’t be at home during the day. The other refuses and says the sender needs to request this. Well, thank you very much. First of all they only deliver between 10:00 and 14:00 and if I need to change address I am reminded that they’re just the final delivery guys and they have received the shipment from a partner. Two days of extra time and phone calls. Why? Are they in desperate need of gaining more work? I mean, it’s all about showing some id for me in the end anyway so it shouldn’t matter? Or am I missing something here? Do anyone of you out there have a job? Or are you just sitting home ordering wine all day long?
* 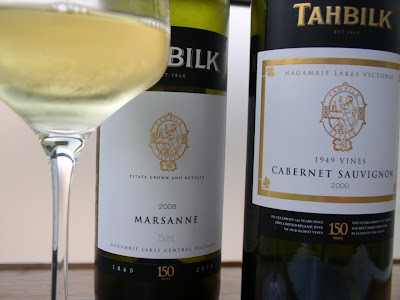 Finally, soon coming up on the blog: a discussion concerning the obsolete use of new world and old world wines. Guest starring: Chateau Tahbilk and Pewsey Vale.
*