What's new:
You are at:Home»Portugal»Grape Varieties in Portugal»Bual»When old is old!

A most memorable visit yesterday to Henriques & Henriques in Camara de Lobos added respect and perspective on the Madeira wine’s almost eternal life! Although the oldest vintage tasted was the truly great 1964 Sercial – boy, what delineation and an acidity to die for – our cicerone, the company’s president Humberto Jardim, showed us the legendary bottles that was considered old already in 1850! 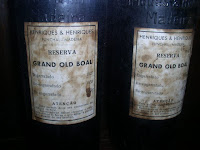 Recorked in 1927, 1955 and 1975 – today priceless bottles, only a few remaining and only sold occassionally. The closest I will get to these bottles are most likely this but one who has tasted is the leading expert on Madeira wine, Alex Liddell.

The Grand Old Boal: ” Darker than medium tawny, with orange tints, and showing olive green towards the rim; very rich and pungent on the nose, without any excess volatility, and a mature fudgy aroma – Boal at its most typical; rich, concentrated, with vanilla predominant, but balanced; wonderfully focused long finish, persistent black treacle aftertaste, going on and on, but nevertheless dry. A lovely wine. Classic.” 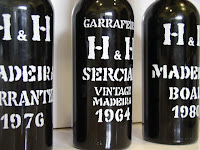 Well, on a day like this when having the 1964 Sercial, 1976 Terrantez and the 1980 Boal, it’s however not such a pain realizing i’ll never taste the Grand Old Boal!