What's new:
You are at:Home»Portugal»Grape Varieties in Portugal»Alvarinho»Alvarinho + Age = Absolutely
I almost drop the bottle when I stand there at the Vinho Verde section at Sá. My favourite producer of Alvarinho, Quinta do Feital, is retailed at EUR 13! Would it be the latest vintage it’s sure a nice price but the bottle I’m holding actually says 2002! First, some doubts run through my mind; this is probably a left over which has stood here some years, and hence tastes old and oxidized. But, 13 Euro’s is not the end of the world, and no one remembers a coward, so later that evening the bottle is popped. 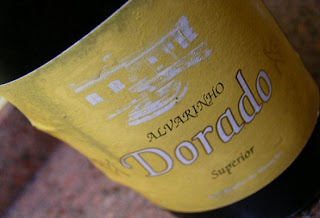 For those of you who has not yet tasted, Quinta do Feital, is a Vinho Verde from the sub region of Moncao where Alvarinho is the only approved grape for the sub region’s green wine. The owner and winemaker, Marcial Dorado, has found a perfect mixture of the very best from both sides of the border. No question about it; the Spanish Albarino region of Rias Baixas has a renommé that the Portuguese Alvarinho’s hasn’t reach yet. But that shouldn’t stop you; instead thank the anonymity for keeping prices more humane, because the Portuguese version is just as good as the Spanish. Should be something of a acidity fanatic as I am, well, then start popping Vinho Verde Alvarinho’s! 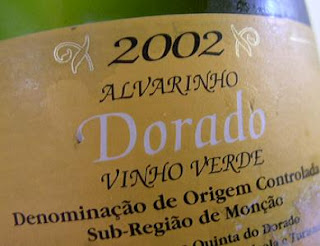 From old vines Marcial produces the Dorado which spends a short time on oak. It adds creaminess to the steely Alvarinho, and also texture to make it more internationally styled. Still, it’s no doubt it’s from Iberia. 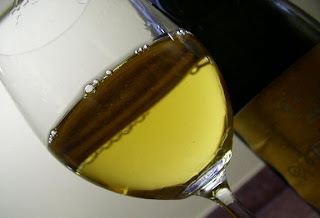 Bottle in perfect condition! The wine has a fine mature yellow colour to it and the bouquet is as complex as Alvarinho gets. Wet rocks, a floral touch, over ripe apples, asparges, fennel in a wonderful mix. Fine creamy taste with plenty of minerally acidity reminding a bit of a mature Pouilly-Fumé, and a dry, long taste with notes of apples, fennel and grass. Not nearby passed its best before date, this seducer still has one or two years left.
If this is how an aged Dorado tastes I can’t wait to have the 2007 with eight years maturity – in my opinion the best vintage ever for Quinta do Feital!
(2002 Quinta do Feital, Dorado, Moncao, Vinho Verde, 92 p)