There’s something about Bordeaux – a never ending love affaire. For me, it’s as simple as that. But Bordeaux is not nice to my wallet because I’m a consumer, not an investor. Prices rise to levels I never thought was possible and along the way the premier cru’s invites the chateau’s just below the elite to come along, making it hard to pick up a reasonably priced quality Bordeaux. I’m not bitter, I just adapt to the current state and find other ways to search for a good claret.

Now, Bolgheri, Italy’s answer to Bordeaux, would seem a nice stop if it weren’t for the prices that is almost just as expensive as in Bordeaux. Sure, great wines indeed but I can’t pick up Ornellaia and Sassicaia on an everyday basis, not even the second wine. But before heading towards new claret discovery’s I bumped in to two, for me, new names.

The first one presented here is Podere Sapaio, a Bolgheri red almost resembling a Saint Julien in its most elegant appearance. 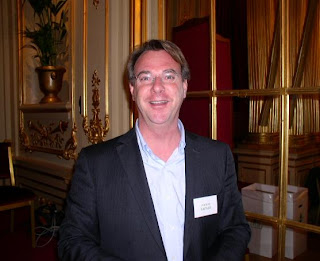 This is Massimo Piccin. He’s managing the estate of Podere Sapaio. The debut is only six years back, in 2004 when the wines were released the first time, but the accolades are already rolling in. Last week when he and a bunch of other Italian producers visited Stockholm I got the chance to talk with Massimo, and try his wines.

It all started when Massimo Piccin convinced his father to start making wine in Bolgheri. Massimo, originating from Veneto in northern Italy, was convinced Bolgheri was the place to be and in 1999 the project started. It’s been a long road to walk starting from basically zero – both when it comes to the winery and land. Podere Sapaio’s vineyards are divided between the municipalities of Castagneto Carducci and Bibbona. The soil is of quaternary deposits and from loose coarse grained sandy sediments to flood land deposits with free draining calcareous soil.

The choice of grapes were simple; the same that has seen such a success in the area for almost half a century now; Bordeaux grapes. But the style Massimo Piccin created together with his brilliant consulting enologist Carlo Ferrini, was not identical with Bolgheri in general at that moment. Both Volpolo and Sapaio expresses a quite restrained style and cooler appearance than many Bolgheri’s I’ve tasted. In a way bot at all unlike an elegant Saint Julien. 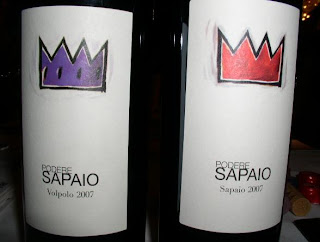 Starting with the 2007 Volpolo (91 p) this is elegance in a glass. A blend of 70 % Cabernet Sauvignon and equal parts of Merlot and Petit Verdot that spent 14 months in french oak and 6 months in bottle prior to release. Furthermore, you don’t need to know the right one’s in the business in order to pick up some bottles – there are 83 000 of them.

Still a very young wine which the colour also reveals. Inviting flavours of black currants, new toasted oak, wet rocks, a slightly herbal green note and floral scent. Fine, mature tannins backed up by a restrained fruitiness, nice weight and classic Cabernet currant and lead pencil. Some green notes in the taste but in a positive way. Quite long taste and most enjoyable already. Retailing in Europe at EUR 17-18 it is not only a worthy stand-in for Bordeaux, it’s a really good Bolgheri!

The grand vin, Sapaio, is a step up in quality. Still reasonably priced and available for anyone with its 23 000 bottles produced. The assemblage differs from the Volpolo; here it’s 55 % Cabernet Sauvignon, 25 % Cabernet Franc and equal parts of Merlot and Petit Verdot. 18 months on french oak and 10 months in bottle prior to release.

The 2007 Sapaio (93 p) is a real beauty! Lovely fragrance of black currants, black cherries, cedar, leather, herbs and spicy expensive oak. Seductive! Taste has elegance written all over it. Reminiscent of a Gruaud-Larose, or perhaps a Pichon-Lalande in style. Massive but mature tannins, fine acidity and pure fruit in the long and intense taste. Black currants, plum skin, spices – almost oriental, leather, wet earth, roasted oak and sweet licorice. At EUR 36-37 it will easily embarass many Bordeaux chateaux that retails for a lot more but don’t deliver as much back as Sapaio. This one has structure enough for cellaring and if you open today be sure it is allowed to aerate several hours in a decanter.