Most of my wines when young show much better after they have been open for four to eight hours.


My circle of American readers are steadily increasing which I most humbly thank for. For you, this posting is perhaps not as exotic as it is for me, knowing you most likely have been enjoying Chris’s wines for years, but I need say it – Champoux really rocks!

There’s something about Champoux vineyard, regardless of whether its the Cabernet Sauvignon from the oldest part, called Block 1, or from any other of the parcels. Block 1 was planted in 1972 and gives the backbone to Andrew Will’s Sorella, a wine I had managed to completely miss out on. Until this year. Perhaps due to correlating elements such as a perfect summer day – even a Sunday, slow-roasted steak, the best gravy I’ve made in years, happy kids and a bottle of the 2006 Sorella decanted well ahead, provided me with the necessary prerequisites?

I don’t know, but Sorella had me right from the start. Being able to follow the wine for several hours it just kept on and furthermore developed that elegance and seductive floral nose I just can’t resist. I thought about it later – was I just extra sensitive that specific day or was the wine really right up my alley? Crossing fingers I popped yet a bottle a month later and yep – just as great. 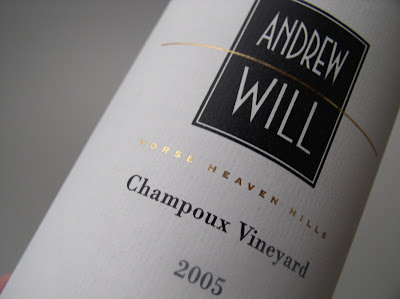 Maybe I started in the wrong end when learning about the Champoux Vineyard interpreted by Chris Camarda – perhaps a better approach would have been the label simply called Champoux Vineyard. No chance in changing that so this fall I had the 2005 and 2006. Similarities with the Sorella yes, but not as mineral driven.

Still, both ’05 and ’06 had the floral scents and the seductive blueberry and tar notes I fell for in the Sorella. No toasted oak driven bouquet or taste although they do spend some time on oak. The Champoux manages to combine a full bodied structure, compact tannins and sun drenched fruit with elegance and that does it for me. The long and pure aftertaste in both vintages are impressive but the overall impression is that the 2005 just had that certain ‘je ne sais quoi’ to it. Both wines showing a decade of ageing potential.

Some words about the Champoux Vineyard; cultivated for several producers by Paul and Judy Champoux it is today owned by the Champoux’s together with Andrew Will, Powers, Quilceda Creek and Woodward Canyon. Located close to the Columbia River, the vineyard is to be found at an elevation of 170 to 215 meters on sandy loam soils. The climate offers plenty of sun and wind and when checking the geographical location it is, latitude wise, more or less at the same as the Northern Rhone Valley.

The younger parcels are more densely planted compared with the older one’s dating back to 1972. Yields are kept down at around 50 hectoliters per hectare which is similar to many top Chateau’s in Bordeaux – taking the density into consideration as well. By the way, all vines here are on their own roots!

I’m not getting into tasting note details this time – just settling with the satisfaction it gives when discovering a producer whose wines you simply adore. 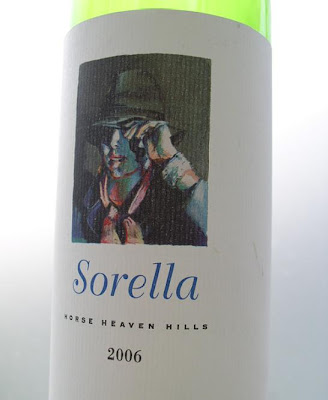 N.B. Yes, drinking a young Andrew Will when talking about wines such as Sorella, Champoux, Sheridan, Ciel du Cheval or Two Blondes, you definiteley need to open way ahead and decant. Believe me, you don’t want to miss out on the floral bouquet!

N.B.2. If you haven’t read it previously there’s a posting I did earlier this summer on Andrew Will and Chris Camarda.

N.B.3. Wan’t to taste? Europeans can benefit from the German wine search engine Wein for hits. Otherwise check out Vinopedia or Wine-searcher for results.