Ask 1,000 randomly chosen wine consumers to pick their preference Riesling based on what visually attracts them the most; a wine bottle with a classic label filled with text such as Graacher Domprobst Kabinett Feinherb, or a wine named Kung Fu Girl? I know; it wouldn’t look nice for the German huh? If you’re not one of those conscious wine drinkers that claim they never buy a bottle by its looks you will probably admit you end up with the Kung Fu wine in your bag. You see, this is how most of us work. A cool label rocks. 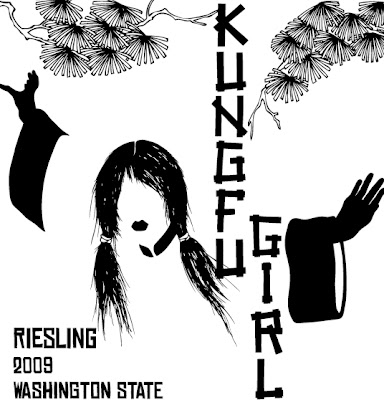 Now, you can’t keep on selling an ass kicking kung fu girl if the girl doesn’t deliver, something Mr. Smith is most aware about. A cool label does the job once or twice but then that’s it. Have a glass of the 2009 Kung Fu Girl Riesling (87-88 p) and keep in mind Charles retails this at USD 12.  – then it is quite easy to become impressed. Easy sipping but still filled with character and site expression. That’s the essence of Charles Smith’s entrance wines whether they are called Kung Fu Girl, Eve, Boom Boom or The Velvet Devil. You don’t have to analyze and write a thesis on them, just enjoy the wines.

Meeting a man you’ve only read about before is exciting. Add meeting an ex rockmanager to that and it gets even better. There’s a lot of writing on Charles out there in cyberspace and lately there’s been some of negative art. Judging a person on what you read makes you narrow-minded and this is not my thing. Therefore it was thrilling to end up having Charles across me at the tasting and dinner last week letting the man present himself. Besides, how cool isn’t it with an American pronouncing ‘For satan mand’ in really good Danish!

We share a year me and Charles. 1999. That was the year I decided to start working in the wine business in Copenhagen. The very same year Charles decided to leave the city and the life as a rock manager, to instead become a winemaker in Washington. By the way; did I sell you some wine Charles? I know you knew the shop… 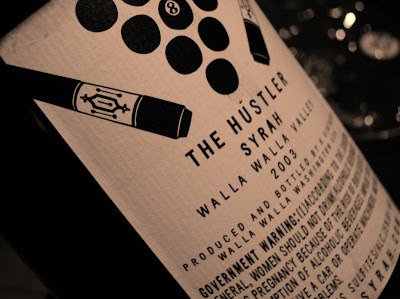 When I think about it I’m more and more impressed. Charles brought a magnum of the 2003 The Hustler Syrah (93-94 p) to the tasting last week. How on earth did you manage to make such a fine wine when you’d only been in the business for a few years? Is that simply the fingerspitzgefühl the Germans talk about?

I died in my teens. Over the years I’ve listened to it hundreds of times. If there’s just one Psyched up Janis song you should listen to, this is the one. How cool isn’t it then to sit next to the band’s ex manager knowing he even shared apartment with lead singer Sune Wagner. Bar crawling with Charles an evening would be great – suspect there’s a story or two you can tell? For satan mand!

No dirty thoughts now but Hustler is great. The 2003 Syrah that is. 32 months on barrel, single vineyard Syrah; anyone up for some LaLaLa vibes? Named after Jackie Gleason aka “Minnesota Fats”, a big man light on his feet. About the wine Charles says: The wine will take you to the moon and back with its deep, deep flavor and super suave texture. So grab a bottle, pull the cork, fill your glass and “Away We Go”! 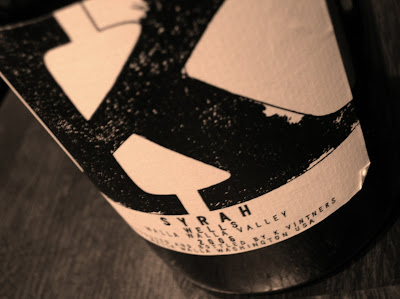 But even better and a wine that really, really caught my attention, was the 2006 K Syrah Wells (95-96 p). Writing about a wine you, dear reader, most likely never will get the chance to taste can be a bit provocative. I know that. Not that the Wells is outrageously prized, the reason is rather spelled 1/2 acre. Two barrels are produced from the rocky soil at 1500 feet up the south fork of Walla Walla River – and Charles poured a magnum of this. I think that is generous. Don’t you?

It’s floral, perfumed in a restrained way making me write Cote Rotie. Cool, pure seductive fruit, clove and sausages. Would love serving this next to Guigal’s Chateau d’Ampuis. All I have to do is dream…

A great introduction to Charles Smith premium Syrah is the 2008 K Morrison Lane (91-92 p). Sourced from the oldest plantings of Syrah in Walla Walla this wine is approachable already in its youth. Quite Rhone-like in style. Something like Chateauneuf-du-Pape meets Saint-Joseph meets Charles Smith. Tar, licorice and bay leafs. Fine structure and good grip. Served with a wild boar Osso Buco which elevated the wine!

Let’s talk En Cerise. A vineyard on ancient dried riverbed in the floor of Walla Walla Valley. Biodynamically farmed and planted in 1997. From here Charles gets the fruit for his K Ovide. We’re tasting the 2008 K Ovide En Cerise (93-94 p). It is absolutely gorgeous. A blend of 67 per cent Cab and the rest being Syrah. There’s a Wells touch to it; lots of mineral feel and Rhone vibes although Cab dominates the blend. Massive, yet silky tannins and great delineation. Let this one lure you! 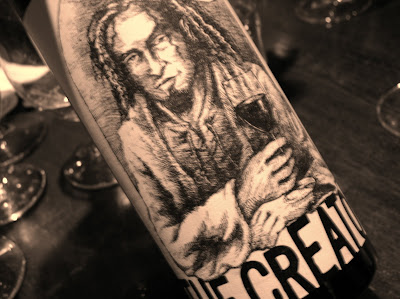 More Cab. The 2008 The Creator (93-94 p) has a similar blend percentage as En Cerise. What differs is the vineyard sites; Stoneridge, Cailloux and Morrison Lane. This is a step up on the taste pedestal. At least that is what my palate tells me. More of everything compared with En Cerise and here the Cabernet Sauvignon doesn’t allow the Syrah to play along just as much. Still elegant and impeccably balanced. Which I prefer of the two? Both! 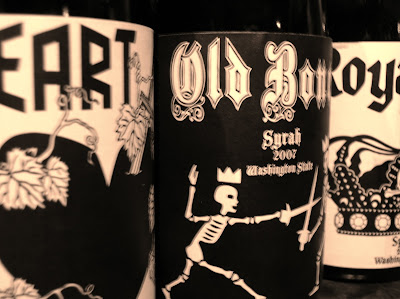 The trilogy of Heart, Old Bones and Royal City are, well what can I say, majestic, huge, overwhelming, packed with flavors and just, just truly divine! I realize these wines will make traditionalists faint and I can actually visualize the “when in doubt, run in circles and shout”-critics reaction when tasting the 2007 Royal City. I don’t care. I like it and for me that is what it’s all about. All three of them has the stuffing to develop secondary aromas and will only benefit from many years in a horisontal position. That’s easy to forget when tasting a young, vivid and concentrated wine just screaming for some bottle age.

These wines all origin from the Stoneridge Vineyard which is located northeast of the Wahluke Slope AVA, across the Saddle Mountains, near Royal City. Rocky soil, hence the name Stoneridge. A windy site, it naturally controls vigor and reduces yields, only 1.7 tons per acre. The fruit is thick skinned and produces nearly black juice and robust yet supple tannins, adding to the aging potential of the wine.Charles gets the Syrah for Heart from the southern section of the vineyard. 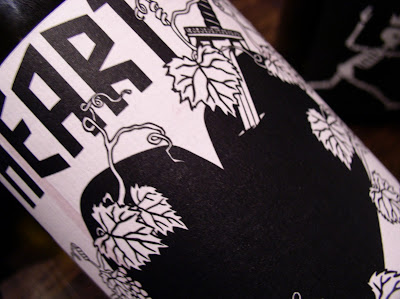 The 2007 Heart Syrah (95-96 p) is a blend of fruit primarily from the southern section of the vineyard. Not receiving as generous oak treatment as the Old Bones or the Royal City which I notice when tasting them side by side. Heart is pumped with dark berries, Christmas spices, humus, sausages and has a floral touch. Probably the most elegant of the three. On the palate it, to use Charles vocabulary when describing his wines, kicks ass. It’s youthful and still a bit untamed but all the components are there. What talks directly to me is the pure seductive fruit. If I had any heart I would risk drinking them all just to get the kick out of the totally delicious fruit. 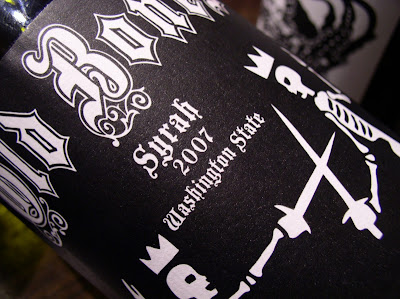 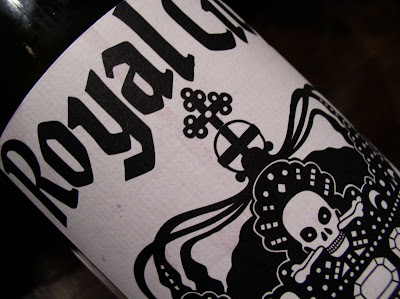 Foot chrushed by Charles. For a friend of Portuguese wines this is poetry to hear. Without going into detail on these wines which has a production on 167 respective 100 cases, I settle with the fact I’m totally in love with the super premium wines of Charles Smith. Hard to get yes, sadly, but if one really wants to taste it is not impossible. Besides, these retailed at USD 120-140 from K Vintners which add some perspective. Not cheap but for the experience it gives you?

A week after the tasting many of the wines are still on my mind. Charles too. And the labels, And the food paired with all the wines. Tasting wine for evaluation might be nice but there’s no dout I prefer evenings like this. When wine is all about being fun!

P.S. Want to listen to some more from Psyched up Janis? Check out this cover then. Kvinde min; perhaps Danish Gasolin’s best one in a new version!

P.S.3. For the non Danish speaking section of my readers I wish to enlighten when it comes to the ‘For satan mand’ phrase. As you might have understood this belongs under the section of profanity. Too often used in the daily speech in Denmark it more or less means ‘God damn it’ and can be used both in a positive or less so context.

P.S.4. I was invited by the Swedish importer, Handpicked, to taste the wines of Charles Smith.