What's new:
You are at:Home»Portugal»Grape Varieties in Portugal»Alvarinho»Dorado Superior – a Spaniard making great Vinho Verde!
Quite funny actually. My favourite Vinho Verde producer is a Spaniard! Marcial Dorado found his way to Monção when he was looking for a vineyard in Spanish Rias Baixas. Nowhere in the bordering region of Spain could he find what he wanted; old vines on granitic soil – for that he had to check out the Monção/Melgaco sub-region of Vinho Verde where the only allowed grape to use, if the wine is to be labeled Vinho Verde, is Alvarinho. 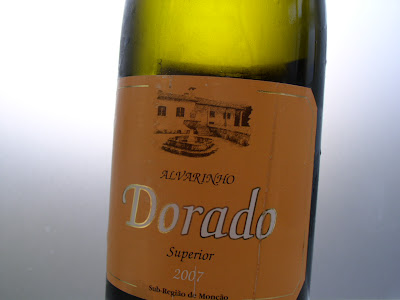 Then, in 1996, he started Quinta do Feital and already today he stands out together with two or three other producers, as Vinho Verde’s best. Hand picked, strictly as well, the wine rests on its lees for up to a year in steel tanks – giving it aromas resembling far from the typical green wine. Still, it somehow has the Vinho Verde Alvarinho touch although Marcial produces the Dorado in a rich, concentrated style and not as a light weight 10% wine. 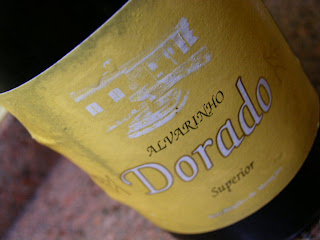 Earlier this year I had the 2002 Dorado and was most impressed while writing:
“Bottle in perfect condition! The wine has a fine mature yellow colour to it and the bouquet is as complex as Alvarinho gets. Wet rocks, a floral touch, over ripe apples, asparges, fennel in a wonderful mix. Fine creamy taste with plenty of minerally acidity reminding a bit of a mature Pouilly-Fumé, and a dry, long taste with notes of apples, fennel and grass. Not nearby passed its best before date, this seducer still has one or two years left. If this is how an aged Dorado tastes I can’t wait to have the 2007 with eight years maturity – in my opinion the best vintage ever for Quinta do Feital!” 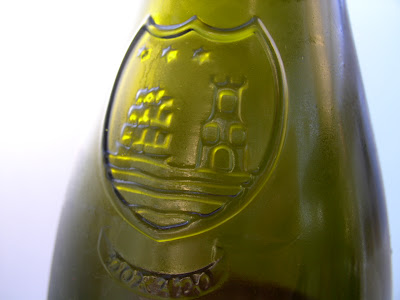 So, time has come to check out the 2007 Dorado again! Opened and decanted for an hour, the 2007 is such a fine mixture of pure concentration and elegance. The first sniff sends me 12 years back in time, to Franken in Germany. My first wine trip and the aromas reminds me of the shell limestone that’s something of a Franken Silvaner trademark! It’s so fascinating almost sending you to the seaside.
There’s a hint of gunflint, fine notes of peaches, fennel, grey pears and a slight floral touch. Right up my alley but if you’re having it for the first time – and are looking forward drinking a quality Vinho Verde – be prepared.
The taste is rich, quite concentrated and almost overwhelming at a start – until you sense the wet rocks and feel the acidity hiding behind the generously fruit packed wine. Peaches, apricots, a green note and again the fennel. It’s still in a starting phase and will need three or four years to fully show what it holds back. Great length! A wine to taste if you’re searching for great personality – and something to trick your wine friends with!
So, what happens in five years? A lot I can tell you. And that is not only to the color, as shown on the pictures below.
(2007 Dorado, Quinta do Feital, Monção, Vinho Verde, 92 points)
Where do you live? In the U.S., The Rare Wine Co retails the 2008, Saratoga Wine Exchange offers the 2007 and in Europe you will find it retailing in the supermarket of Sá. My Swedish readers will find it possible to order the 2007. Also, if you’ll find it, the Auratus – a blend of Alvarinho and Trajadura – is a must buy. More of a classic Vinho Verde, or at least how it should be. Pure drinking pleasure!