What's new:
You are at:Home»Portugal»Regions in Portugal»Beiras»Filipa Pato: 2008 Lokal Silex

“Some years ago I was driving from Bairrada to the Dão valley, using the old road between the Caramulo mountain and the Buçaco castle. I was struck by the beauty of nature and the authenticity of a region lost in time. My eyes fell on a fantastic old vineyard surrounded by granitic stones next to a Roman way – incredible. I tasted the grapes and I was more than amazed by the deepness and character I experienced. I drove back home singing Louis Armstrong’s classic :« What a wonderful world »”.

Now, this is exactly what wine is all about – passion! The words are Filipa Pato’s when describing the history and origin behind her Lokal Silex – a wine originating from the Região Demarcada of Dão but labeled and bottled as a Vinho Regional Beiras.

There’s something special about Filipa’s 2008 Lokal Silex. Every now and then you sample a wine that reminds you why the passion of wine got you hooked from the very first beginning. One needs these wines – at least I do! When recently having a bottle of the 2008 I was impressed, to say the least, by the elegance, precision and impeccably fine fruit and acidity of the wine – a true beauty. Being a sucker for finesse it had me captured at the very first sip and I was amazed of just how good Dão can get.

You have probably read it before – the popular comparison with Burgundy. Not that Dão is resembling the French region and the Pinot grape, but the elegance and the acidity they seem to share as the mutual denominator. I’m often surprised of the fact that not just a fraction of wine tasters and wine drinkers believe Portuguese wines all are emanating from hot wine regions and expresses quite similar styles of wines. Please – if you find yourself having those prejudices then taste the 2008 Lokal Silex!

I had to ask the wine maker herself, Filipa Pato, about the great performance of the 2008 Lokal Silex. 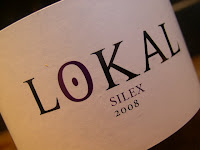 ‘Hi Filipa! Having tasted your 2008 Lokal Silex recently I must congratulate you on a great wine. Can you tell me more about the ’08 and the Lokal Silex in general?’

‘Dear Niklas. I’m so happy of your great compliments. By coincidence we this week had a tasting in London for Sarah Ahmed’s 50 Great Portuguese Wines and Wineanorak was also very positive about Silex, have a look here.’ 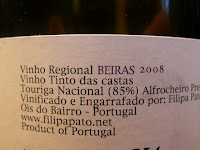 ‘The Lokal Silex consists mainly of Touriga Nacional completed with some mystery friends. The terroir, Silex, consists of granitic flinty soil. The cropping used is Taille Guyot and the vinification is organic. The vines are around 20 years old and the density around 4000 vines per hectare harvested at 18hl/ha. We only use wild yeast – purists as we are! Fermentation in lagares at a maximum of 27ºC and a pre-maceration of 2 days at 10ºC. Matured in casks during 12 months.’

‘Which vintage of the Lokal Silex are you most happy with? Is it a ny specific or is it more the feeling of learning more every year and hence the latest vintage being your own favourite?’

‘2008. Every year we try to improve the viticulture and the way to vinify each parcel. The 2008 vintage was particularly good because the summer was less warm and with little rain just enough for a balance maturation. The cycle was 1 week larger and the acidity was great.’

‘What’s your own estimate on the cellaring of the Lokal Silex 2008?’

‘Would you say it is a big difference between Silex and your other wine, Calcário, also labeled after the soil it grows in?’

‘I believe that the adaptation of Baga and Touriga Nacional really depends of the soil, Baga needs calcário, Touriga needs granitic soil. It’s the reason I identify Bairrada and Dão by Calcario and Silex. Calcário I made in oak lagares inspired by Roman times, and the vineyards have are at least 80 years old. Density of plants more than 8 000 vines/hectare. I made Calcário in 2003, 2005 and 2009. Only in the vintage I’m really happy with I make it. They are very different wines. I hope you can taste the 2009 Calcário, It’s the best ever for me!’

‘What’s your inspiration and do you feel your experience from outside of Europe affects your way of making wine?’

‘First of all the experience I had with my family, since I was very young, when we traveled together to visit other regions in Europe. This already fascinated me and when I finished my degree in Chemical Engineering I decided to travel around the world to open my mind. The fact I have experience to work in France, Australia and Argentina gave the chance to build my own world in Bairrada focusing on the native grape varieties. My dream is my reality. We have an amazing potential to explore with such diversity in grapes, soils, climate, etc…’

‘Any new projects we can look forward too?’

‘I have a new project together with my partner in crime, a company called Vinhos Doidos (Crazy Wines) and we make for the moment 2 white wines. An inspiration from the Brazilian dance Bossa Nova – we make BOSSA (Maria Gomes, the grape variety)- wine to dance – and NOSSA – a complex wine for meditation.’

A dark young wine with pink rim and a young nose with lovely perfume. Scents of flowers, cherries and plums, wet rocks and just the slightest addition of fine oak. The elegance and finesse reveals a higher topography, something that is confirmed by the impeccable acidity and tannins in the mouth. Fine fruit, nice concentration and presence, this one captures me right away. Cherries, rocks, oak, flowers and a touch of summer lawn. The feeling of satisfaction stays for quite a while on the palate. 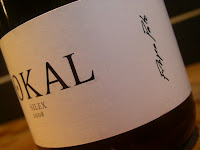 Great glass and spot on my taste! I only have one problem – will this get even better? How am I supposed to find out, because keeping the bottles will be such a tough one considering the greatness of drinking this already now!