Diluted wine juice? Or perhaps one of those modern rosé’s which seem to have lost their pinkish pale rim? No, this is simply burgundy red and although we’re not in France it is the Spätburgunder displaying its pale colour! Should wine be judged by its colouring this would most likely not score many points, but this is what makes Pinot Noir such an exciting grape variety! How can something resembling diluted wine in its appearance have such a fragrant and captivating nose? 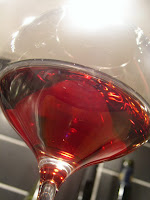 We’re in Baden, more exactly in Oberrotweil, Kaiserstuhl. The village, with its 1600 inhabitants, is the largest in the community of Stadt Vogtsburg and here you will find several classic sites for the Pinot grape and for years this has been somewhat of a kept secret for the domestic market. Baden Pinot, especially Kaiserstuhl, are highly appreciated amongst Germans and when tasting the 2006 Oberrotweiler Eichberg from Weingut Freiherr von Gleichenstein it’s easy to understand why most is drunk locally.

The Eichberg – a south facing site with slopes from 10 to 45 %, has a soil consisting of mainly vulcanic rock. Well drained it produces racy Spätburgunder grapes with the classic German touch to them. When Pfalz many times struggle with a micro climate tending to produce grapes with too good Oechsle the wines at Oberrotweil in Kaiserstuhl enjoys a longer maturation period which gives the wine maker better control over residual sugar and acidity – and avoiding the toughest feature of German Pinot in my opinion – bitterness. 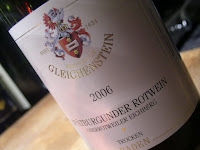 When knowing what to expect from a Gleichenstein Pinot – in terms of colour – it is almost as looking at an old mature red wine where the antocyans has sunk down as a crust in the bottom of the bottle!

The bouquet shows hints of maturity with it’s lovely nuanced notes of compost, leaves, dark cherries, roses, strawberries and just a hint of oak. In the mouth it shows more of spices, strawberries and smoke, nicely folded by the oak. Fine balance in a cooler style with no residual sugar dropped behind. Fine acidity with few but mature tannins. Not long, just enjoyable! A great glass to drink on its own and even better together with a turkey served with a chanterelle’s sauce and mashed potatoes swimming in plentiful amounts of butter.

Gleichenstein is a shining star that seems to have been well hidden by the Germans – but when the German wine magazine Vinum last year awarded the 2005er Oberrotweiler Eichberg Spätburgunder Barrique Reserve the wine of the year title, the Gleichenstein’s are now more seen in international press as well.

The 2006 was less than EUR 11 when bought. If you wish to try it out then the 2007 can be found at Belvini – EUR 10,50. Should you wish to put up a battle between a Gleichenstein and a Pinot from Burgundy then go for the 2005 Oberrotweiler Eichberg barrique. At EUR 30 it is a great buy and definitely showing why German Pinot Noir can compete with France.