What's new:
You are at:Home»Greece»Grape Varieties in Greece»Agiorgitiko»Guest blogger Markus Stolz: Presenting Greece
Imagine the following. You’re standing there in the wineshop. The shelves are filled with French, German, Italian and Spanish wines. American wines, Aussie’s, Kiwi’s and South African’s. You name it. But Greek wines? Probably none. If there were any, how many of you would pick up an Agiorgitiko or a Xinomavro prior to the established, but not necessarily, superior wine countries?

Markus Stolz would! Markus, a German, lives with his Greek wife and their four children in Athens, where the wines of Greece first captivated him. He holds the advanced certificate of the WSET, and authors Elloinos, one of the most respected information sources on Greek wines. He can be found on twitter @elloinos.

Greek wines are often overlooked, so in order to help spreading some light I have invited Markus as a guest contributor for a series of articles on Greece and its wines. And what could be better to start off with than, as Markus puts it, the Greek Le Pin – Kokkalis Estate!

Markus – the word is yours!

Taking part of the Kokkalis 2009 harvest!

The story of Christos Kokkalis is well known – he is the man who was a pharmacist in Germany for most of his life, then decided to sell out and start making wine in Greece. He wanted to show the world that great quality could be produced in Greece. He had no prior winemaking knowledge and took his chance.

All wines are stunning; Trilogia has become an icon that regularly outdoes French Grand Cru wines under blind tasting conditions.

I went to Skafidia where I spent 2 days with him helping at the harvest and the winemaking. This was a great experience and I learned a lot – not only of the mechanics involved, but also about the decision making process. The Cabernet grapes were harvested under perfect conditions the week before. Suddenly last weekend, heavy rains hit the vineyard. The Syrah grapes are very fragile, and many were split open. Christos explained that the skins of Syrah split very easy, it is similar to glass breaking. After the skins were damaged, the wasps started circling in quickly to take some juicy bites. The risk of disease also increased.

The mood on Monday morning was clouded, although the sun was out. Despite the heat turning up, the vineyard was still muddy. Christos had given the order to pick the grapes at dawn – he said that conditions until this weekend were perfect. He would have liked to start the harvest of the Syrah one week later, but his hands were tied. 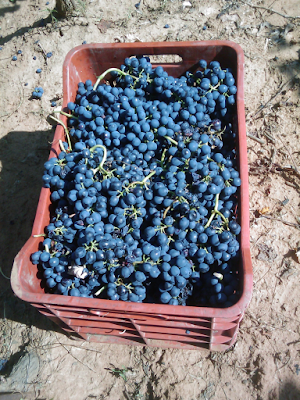 All grapes were handpicked, placed into plastic boxes that were stacked on a platform of a tractor; from there the boxes were placed on a truck and immediately transported to the winery. The winery is not really a winery – it is a large garage in the back of the private house of Christos. It functions as the winery, and it is here that all the winemaking takes place. There are no automated processes – every step of the winemaking process is done mechanical.

The grapes filled the air with their aromas, I just stood there for a minute and sniffed, it was wonderful. The boxes were emptied into the crusher, 4 boxes at a time. The crushed must of the first two loads was transferred into large plastic buckets, after this all must was transported into the stainless steel tanks. The large plastic buckets were placed to the side, and we proceeded to crush this mass of pulp by hand and sieved it in order to collect the pure juice.

This juice then has a crucial role: A part of it is mixed with enzymes and added to the stainless steel tanks that by now, started filling up with the must. Another part was used to mix with sulphur – the smell of it was hard to take, I nearly fainted. This was also added carefully to the must. Another part is used as a sample. We delivered this to the oenologist who ran lab tests. A couple of hours later Christos took me and showed me how to prepare the yeast. Warm water was combined with sugar; the yeast was carefully mixed in by hand. The resulting blend was then transferred to the tanks that by now were pumped over continuously.

After hearing the results of the lab test, the mood of Christos lightened up a lot. He had feared that the acidity levels might turn out low, which they did not. Apparently the harvest took just place in time. The grapes delivered a lot less juice than in other years, as the water inside the grapes dried out quickly after the rain had split the skins. Alcohol levels remained high, so no premature fermentation had occurred. The must was much more concentrated than in any other year; this just might result in a super rich wine. It is too early to tell now, but over the next 2 to 3 weeks Christos will closely follow the evolution of the Syrah.

Monday night we went out for dinner in a fish taverna. After the meal we had a bottle Syrah 2006 to celebrate the harvest. The wine has a deep purple colour and really started to open up after an hour. It has big fat aromas of cassis, mocca, spices and hints of vanilla. It is rich and fullbodied. In my opinion it might even outlive the great Trilogia 2006. The Syrah did not tire out at all – it only got more interesting with time.

On Tuesday, we brought in the second half of the harvest and repeated the work from Monday, but now everybody was in a good mood. Another experience for me was to taste my youngest Trilogia wine ever, the 2009 vintage that was now 5 days old. It was totally fascinating to see how grape juice transforms into wine. After 5 days, I could already taste the rich fruits and the tannins were very evident. This was not any longer juice, but also not yet wine. It made me think of a butterfly that picks out a foot of his cocoon, ready to enter another world.

Harvest at Kokkalis Estate presented by Markus
Editor’s note:
Christos Kokkalis doesn’t nurture a dream of becoming a Greek equivalent of the Grand Cru’s from Bordeaux. No, he simply wants to show us that the western Peloponnesos offers ideal conditions for production of high quality wines. There’s no secret recipe in his way of proving that – it’s all about the usual stuff; keeping the yield down, no water irrigation, thinning, strict selection and so on.
The Kokkalis wines are hard to track down but for Europeans with the possibility to go e-shopping, the three wines can be found at Wolfgang Weber.

Soon: Checking out the 2008 Kokkalis Trilogia!