What's new:
You are at:Home»New Zealand»Regions in New Zealand»Martinborough»Had any twelve years old Kiwi Pinot lately?
My fascination with New Zealand Pinot Noir continues and doesn’t seem to end. Central Otago, Martinborough, Marlborough or Waipara. Although noticing an extra weak spot for Waipara, I’m still very much into all. However, what I don’t have much experience of is mature kiwi Pinot. Therefore, when bumping into the 1998 and 1999 Murdoch James Estate’s premium bottling, Fraser, I’m all excited. How will these taste? Have they managed a decade of cellaring?
Roger and Jill Fraser started out in 1986 when the Martinborough estate took its first form. Starting with Pinot Noir and Syrah it took some years before their first bottlings were a fact – 1993 to be exact. Over the years the estate grew and so did the number of varieties planted.

The Fraser is one of two premium Pinot Noirs from Murdoch James and it is based on a small selection of their best barriques. Only produced in excellent years it stays around 20 months on French oak. 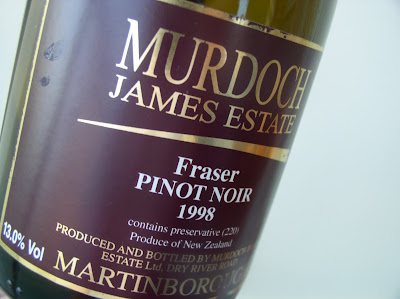 Hmmm…doesn’t start out positive – a bit smelly right after popping. No defects however so left in the decanter for half an hour. I’m then quite surprised by the power the Fraser shows when poured together with our meal. The color is quite dark for the grape and age. Still a bit funky on the nose but that will probably just appeal to the compost loving Pinot people out there. The scents of dark cherries, leather, humus, spices and a slightly green note are perhaps not as Pinot’ish as I want but the bouquet don’t have to feel ashamed for that. Old yes but not cracking up or unpleasant feel.

On the palate it shows pepper, smoke wet earth and mature notes of plums and morello’s. Leaning towards a bit dried out but not to the extent that the acidity becomes volatile. Quite concentrated and long leathery finish. Continues holding together the whole evening and somewhere after being decanted for two hours it is at its best.

The general feeling is one of an experimental character. I have yet to taste the more recent vintages of Fraser, but would actually be surprised if the style hasn’t changed over the last 12 years, when considering how much the wine industry has evolved during that time in New Zealand.

P.S. Served with a bacon wrapped chicken in a creamy sauce.