Nostalgia. A term used for describing a yearning for the past, often in idealized form

Besides being a hopeless wine romantic I am also a master of nostalgia. This especially goes for vintage port. The joy of drinking old and perfectly mature vintage port is hard to beat; the wine takes you on an emotional ride and it is hard to believe a wine can end up with that silky texture – if you’ve ever had a young vintage port. I remember the 1963 Taylor’s Vintage port, the 1960 Quinta do Noval and the 1920 Dow’s. What wines! Mmmmm…..

But I also keep a fond memory of the 1965 Fonseca Guimaraens; a memory which has followed every Guimaraens I’ve tasted afterwards. The 1965 was my introduction to mature vintage port. I had it around 1994-95 and the gates of Vila Nova de Gaia opened up for me. Although light, it was the quintessence of elegance and a great experience.

Nostalgia implements it was better before. Was it? I know, port wine from years such as 2000, 2003 and 2007 are probably going to be great experiences when I’m old. They’re saying patience is a virtue but come on; 30+ years? I can’t wait that long! Will they really be as fantastic as 1963, 1970 or 1977? How much has the style changed the last decades? Since I wasn’t around to taste the 1963 Vintage Port at the age of two or three years, I can’t tell. And until I’m 70 I’ll have to rely on nostalgia before changing my mind!

I know. It’s not nice to the 1995 Fonseca Guimaraens to be compared with a vague and great first impression of a vintage Port which happened to be Guimaraens 1965. But hey, I’m a wine romantic. This is what I love!

Christmas port. You got to have a Christmas port. An open bottle you can enjoy over the whole holidy season. Last year’s choice was the 1995 Fonseca Guimaraens vintage port. 1995 by the way; can be added to those forgotten or neglected years which almost did it as a classic vintage, but for some reason weren’t declared. 1982,1987 and 1995 are my favorite forgotten about-years. 1995 simply came too close to classic vintages such as 1991 and 1994 and I guess you didn’t want to flood the market with VP’s. Who knew what was awaiting for the rest of the decade? 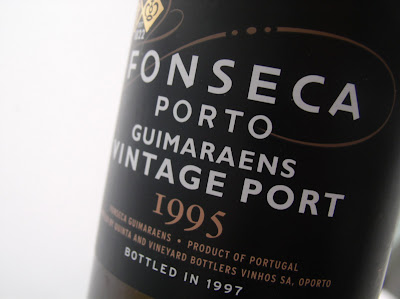 Fine bouquet, slightly evolved. Sour cherries, leather, chocolate, sweet licorice, earth and tobacco. Some alcohol attack on the nose. Then, on the palate, the hollow feeling. I lack a bit of a structure and mid palate – and there’s a slight harshness to it, as if the grapes were heat stressed. Fine finish though, although not that long.

Letdown. Why Guimaraens? I can’t recognize you. No need to drink this now I feel so the bottle is allowed to continue taking in some air for a day extra.

Second day. Approaching the 1995 with some scepticism only to find out the palate is opening up. More harmony now. Is it that simple? Time needed?

Third day. Now it’s really nice with fine presence on the palate. I think I’ll revise my initial disappointment to one of positive surprise. This is actually really nice but either in a semi-dumb phase or just tougher than I thought of the 1995’s. Perhaps it is just as time needing as a Vintage port after all?

Moral of the story: Don’t judge too quickly. Be patient. It’s a virtue they say. Perhaps this after all, will be a new 1965 and keep three decades? It certainly has 8-10 years more to give, that’s for sure.

PS. Give this time please, if you pop it at home now. The wine will reward