What's new:
You are at:Home»France»Regions in France»Rhone»Sub-regions in Rhône»Cote-Rotie»Oh la la la! (Or: When wine gets you emotional and you can’t decide whether to laugh, run around or just start crying!)

Vinously speaking, I will remember and cherish Thursday the 28th of October 2010 for a long time! Too seldom do I get the chance to taste the super premium wines of E. Guigal. I honestly confess I have serious issues in paying 220+ euro’s for a single bottle of the recent vintage released on the market. I also however, confess these wines are reference points for me – wines I do need to taste in order to remind myself why I’m into this stuff. Contradictive? Perhaps, but most of all a struggle with my inner conscience (and trying to get my wife’s approval of such a purchase!). 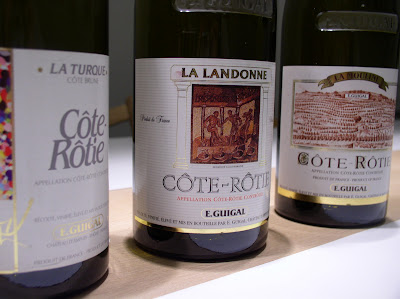 For most of us the quartet of Chateau d’Ampuis, La Landonne, La Mouline and La Turque plays in the Major League and we’re translocated to the spectator bench. Self-elected perhaps, but still, my own track record of ‘LaLaLa’ wines aren’t impressive; four different tasted over a period of thirteen years. So most of the time I’ve tasted the wines through tasting notes of the more fortunate.

Yesterday I was amongst the lucky ones! I realize my impressions of the quartet won’t function as a ‘to buy-list’ for you dear reader but consider this merely an inspirational post saluting one of the wine world’s greatest! 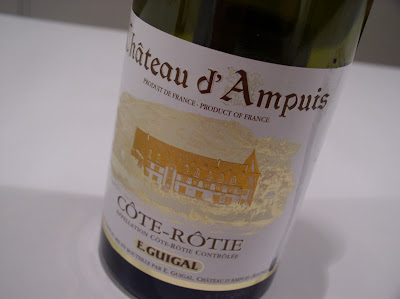 Having just had the 2005 Cote Rotie Brune et Blonde (92-93 p) – a massive and perhaps a bit atypical style, I was poured the 2006 Chateau d’Ampuis. A mix of 93% Syrah and the rest being Viognier, it spent 38 months on entirely new oak! Just reading this would probably scare off more than one, but the fact is: the wine chews oak for breakfast!

Ok, the barrique is there but it never gets the chance to dominate. Instead the wine’s origin leads the way with an air of elegance accompanying. The perfumed notes emanating from Viognier adds depth that, for me, makes this Cote-Rotie an emotional wine. The spiciness, dark berries, iron and violets are sublime and this is just one of those bouquet’s that are impossible to describe, since it is constantly changing character.On the palate the d’Ampuis shows a massive structure with huge amounts of fruit, silky but yet massive tannins and lovely restrained acidity. Long, lingering aftertaste with such a fine taste from both the oak and the pure fruit. Retailing at around 100 euro’s this, I think, could be that one wine to buy when in need of a reference point. Knowing the three ‘LaLaLa’ is awaiting I’m already questioning if they really can be that much better?

Well, guess what -they are superior! If d’Ampuis were an emotional ride I don’t know how to express myself when it comes to the 2006 La Mouline. I could hardly start dancing around there in the tasting room – or start crying for that matter! This is one of those wines I really need once in a while in order not to question my wine passion. It stirs up emotions, speaks directly to the heart and is simply put; a dream to taste! 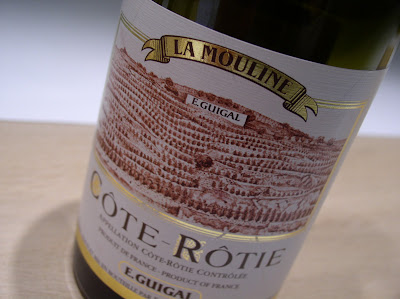 The high percentage of Viognier from ancient vines in La Mouline is perhaps what’s attracting me. Just as the case were with the d’Ampuis bottle it shows an elegance and perfume difficult to describe. There’s this air of sheer world class surrounding the wine and although the La Mouline is the one expressing most oak scents in the trilogy, it never allows the barrique to dominate. 42 months of oak and not an oak monster! Eat that doubters (me included)!

The glass fills the nose with perfumed scents, toasty new oak, red berries, spices, humus and violets. First when returning to the glass later on the dark chocolate shows up and a light feeling of kirsch. Never overworked, just craftsmanship at its very est. The elegance being the wine’s trademark in the bouquet continues on the palate. Such fine concentration, massive tannins and tickling acidity. Great length. On the palate the perfumed notes shows up again together with humus, violets, spices, an iron like feeling and kirsch.

I could give this a perfect rating since I have a hard time keeping back the emotions. I’ll settle with just saying this is sheer world class and a reference wine for all who strives for the elegance of a Cote-Rotie! By the way; La Mouline is the oldest vineyayrd of the three with vines averaging 80-90 years.

When La Mouline is all about elegance the La Turque adds a bit of power to the complexity. Lesser percentage of Viognier it is more of a mineral driven wine for me, it also shows darker cherries, less oak feel and a more meaty and spicy style. Doesn’t speak to you as immediate as the La Mouline but has a bit more structure to it – which evolves in the glass. 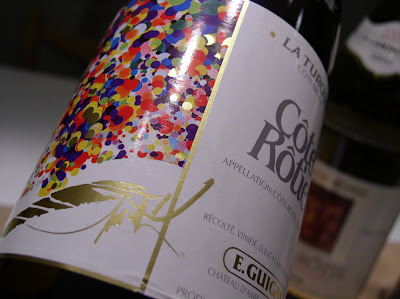 But, this wine is all about having all components there and showing such presence! The violets, Valrhona bitter chocolate, licorice and warm earth gives me an impression of a denser wine. Still, elegance is its trademark. On the palate it shows a tougher structure than the previous one. A bit more solid, not as silky tannins and more dark fruit to it. The concentration is impressive and the meatier style is awesome. Great never ending length. World class precision. Could I have a dozen please? 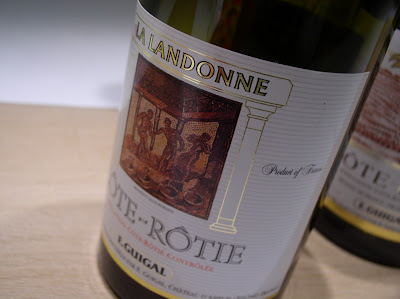 La Landonne stands out as the most impenetrable of them all. Not color wise but with its composition entirely based on Syrah, it has even more stuffing to it. It oozes of warm earth, smoke, dark cherries, kirsch, meat and spices. 42 months on new oak? Now, where did that go? This monster seems capable of chewing even more barrique!

So, what about that d’Ampuis after my senses has been run down by the ‘LaLaLa‘ wines? Still a tremendous wine but doesn’t really play with the big guys and reaching up to the same greatness. However, Guigal et C:o had me at d’Ampuis and it is hard to believe there’s even more to come! I don’t know if it’s worth speaking of prices. A ‘LaLaLa’ wine is 120 euro’s more a bottle but then they all gave me tasting experiences I can live on for years. If you, at any point, feel an urge to treat yourself with a unique tasting experience perhaps it is worth skipping buying a case of wine one month – and just pick up a single bottle? 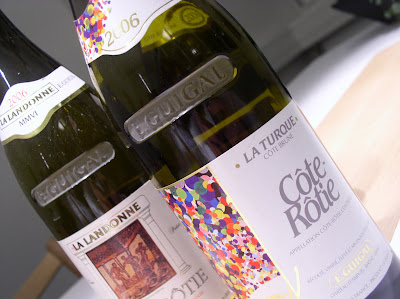 N.B. I was invited to taste the wines together with three other wine bloggers in Sweden. Claes Lindkvist, CEO at the importer, Vinunic – a part of Vingruppen, will release the wines in Sweden next week. Although these probably will sell without him needing a push from a wine blogger I’m most thankful for Claes inviting us to taste the wines. Some would say it’s all about keeping a good relationship with bloggers and actually I’m fine with that. I don’t have any issues with it – I mean; I still only write about wines that has an impact on me. Thank you so much Claes!