In the mood for some Pomerol? How about picking up a mature Má Partilha from Bacalhõa Vinhos, formerly known as J P Vinhos?

I’m not fooling you although I have to confess I, since six years when I first bumped in to the wine, have an ongoing affaire with the Merlot from the peninsula of Setúbal, more exactly the region of Terras do Sado. Or to be exact; in the vicinity of Azeitão. Bacalhõa Vinhos, formerly known as J P Vinhos, planted the Merlot vines 1985 close to the tranquil village of Azeitão mainly recognised as being the home of the world famous firm of José Maria da Fonseca.

Consisting of only 2.5 hectares the Má Partilha only stands for a small contribution to the Bacalhõa Vinhos empire. But what a contribution! It is never a powerful wine that one might think considering the climate in the region. Au contraire it is a wine with some finesse, elegance and almost Pomerol look-alike bouquet that I most likely in 99 of 100 cases never would have placed in Portugal. 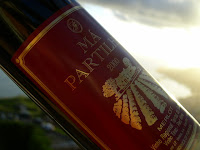 Systematically checking out the shelves at one of our local supermarkets I came across a true find; one remaining bottle of the 2000 Má Partilha -behind it a case of 2005’s calling for attention. Checking the price – EUR 13,11 – the bottle was quickly removed and put in the basket! We’ve been following the wine since 1994 and has seldomly been disappointed – tonight included.

In the mouth an elegant wine with fine maturing acidity, iron mouth feel, plums, a slightly vegetal note, vanilla fudge and tar. Not a long finish but most delicate and easy to love. The grape typicity can not be in doubt – this is Merlot. Good Merlot indeed!

What a pity only one bottle remained. This would have been a great joker to pop at a blind tasting, even sneaking it in a BDX tasting!