What's new:
You are at:Home»Italy»Regions in Italy»Veneto»Amarone»Reflections of a wine lover – report #56

“Chile? I don’t even need to taste the wine. You can just stick a bottle up my arse and I can tell you where the wine’s from.”

You’ve read it before – the words of André van Rensburg at Vergelegen. Prejudices? Or is it a fact that Chilean wines are that easy to identify? Certainly the words of a man taking the chance to gain more publicity but come on – we all have prejudices against certain wines, wine styles, regions or even countries. I do. And I need them! Without my biased approach I wouldn’t get any chances of modifying my beliefs and constantly be surprised!

Every now and then you need some eye-openers; just a reminder on the complexity of the wine world, that famous sites or Chateau’s aren’t a guarantee when paying high bottle prices, southern wine appellations can produce wines without heat and scorched earth, Amarone can be taken for a high class old school Chateauneuf-du-Pape – or just how much the point of view differs between tasters.

Thank you for reading newsletter no. # 56 – let’s open some eyes!

Wine battle! A 2006 Corton from Domaine Rapet versus the 2007 Spätburgunder from Fritz Becker. 50 Euro’s vs 10. This will get ugly you think and boy are you right! Being the evil conférencier I know what’s in the glasses but I am curiously awaiting the judgement of the experienced tasters gathered around the table.

Now, I have tasted the wines before and have my opinion ready but can really a 10 Euro wine compete against a Grand Cru Burgundy? Both bottles were given a fair amount of time in the decanter before poured back in the covered bottles. In glass number one the Corton and then the Fritz Becker. 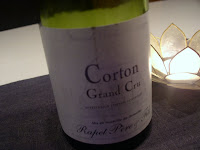 Rapet’s 2006 Corton shows fine and noble red berries character and plentiful of new mascara – oak that is. It’s a nice bouquet but for a Corton you want just more than good cellar work. Personality? In the mouth it is quite balanced but lacks stuffing for a Grand Cru and is a bit monolithic. A touch of bitterness and the aftertaste leaves only disappointment. Nice but the general feeling is more of the character ‘Have I been pickpocketed?’. On a good sunny day it’s worth a 88 points rating.

The Spätburgunder from Becker is represented with the great vintage of 2007. But on the other hand it is the most simple wine from the portfolio of the German Pinot master family. Retailed in Germany at around 10 Euro it shouldn’t have a chance against a Corton normally – but I suspect it will. 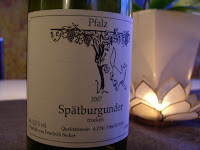 The bouquet is definitely more interesting with classic Pinot’ish scents such as the strawberries, wild strawberries, earth, compost, saddle leather and floral features. Yes, you can notice it doesn’t have that certain je ne sais quoi but still it’s catching your interest. Fine acidity, mature fruit and tannins it is maybe more easy going but it has personality and some length. Just a touch of oak to it adds character. At the moment my choice as the everyday Pinot and rated 86-87 points on three occasions now.

Sensmorale: Famous and classic names aren’t a guarantee when buying an expensive bottle. Nothing new to that but that the difference is miniscule as in the battle above can only be considered embarrassing if you’re name is Rapet. Know your Burgundy – if you don’t then keep away! And do open your eyes and accept the fact that Germans can win the Pinot lover’s favor as well!

Amarone – a wine for the bourgeoisie? Or – do you want to start a conversation at the dinner table of the landlord and landlady? -say you love Amarone! Prejudices? Me? When oceans of crap emerges from a wine district just benefitting from a grand name it is easy to become biased, but the Saturday evening’s agenda was breaking prejudices. 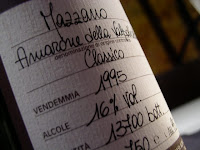 In the glass a dark red wine with a mature brownish brim. Starting a bit cautious with notes of mushrooms, soy sauce and dried figs together with dark plums. Then by a sudden nostalgia! I am sent decades back in time and finds myself being a little boy again playing soccer on the sunny warm and sandy road! Wow! The wine opens up and the bouquet is most complex; I’m adding scorched earth, tar, tobacco and a feeling of Chateauneuf-du-Pape.

In the mouth the wine confuses. At the same time it gives the feeling of emerging from a hot wine region the fruit sends signals that the topography is high above the sea level. Elegant and at the same time powerful.The dark plums and its skins, the sandy road, compost, tar makes me jumping from the southern of Rhone and Piemonte. But the tannins are not Nebbiolo like and finally my guess lands on a great mature Chateauneuf-du-Pape vintage 1998.

The bottle? A 1995 Masi Mazzano Amarone della Valpolicella! 95 points for its greatness and the bonus point for sending me back to my childhood! Even if I thought I had tried it all from Amarone I admit this wine was my eye opener of the evening sending me back to the school bench.

How can a wine from the southern of France send a bunch of tasters to Austria? The 2006 Domaine du Mas Blanc Cuvée Junquets from the appellation of Collioure managed to trick even if Syrah was recognised as being the dominating grape variety quite fast.

One of Mas Blanc’s prestige wines the 2006 Junquets reveals funky notes of white pepper, red berries , kirsch, spices, earth and a bouquet more on the elegant side. Currently a bit restrained but nevertheless it didn’t send out any hot signals which explains the Austria track. 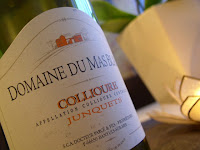 Fine acidity, elegant fruit and still an extremely young wine, this really appeals to my taste buds. Never powerful, more like a fine Cote Rotie it amazes with its grace and floral touch. Quite long finish. (92 p) 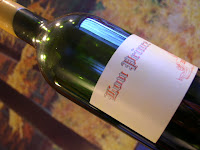 So, how did the tasting group find its way back to France? Well, it was a battle and the glass next to the Collioure was a Cahors – 2005 Lou Prince. Dark as a winter night, packed with blueberries, new oak and plums it finally revealed the theme and the Junquets were then identified. (90 p)

Plague or cholera? No, it wasn’t that bad but the battle between the 2006 Chateau Les Carmes Haut Brion from Pessac-Leognan and the 2006 Le Cupole from Tenuta di Trinoro was a fine example on how difficult it can be buying classic Chateau’s without disappointment taking over. The Tuscan competitor on the other hand showed how different we think of wines. 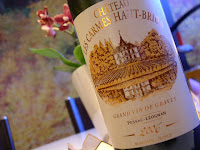 Starting with the Bordeaux wine it sent out a message of being overworked and besides lacking personality and being a bit austere it also had a strange feeling of over extraction considering the grape materiel brought in. I have noticed this is becoming more and more common in Bordeaux, with over extraction in more difficult years, and it just erases all typicity of the wines.

In a strange way I actually preferred the 2007 from the same Chateau tasted half a year ago. Chateau Les Carmes Haut Brion benefits not only from its name but also the fact it is situated close to the two world famous Chateau’s in the suburb of Talence; Chateau La Mission Haut Brion and Chateau Haut Brion. The choice of Les Carmes for the battle was simply the composition of grapes – high percentage of Cabernet Franc complemented by Merlot and Cabernet Sauvignon. The overall feeling is a wine that is trying to seduce with its quite developed and fragrant bouquet but fails miserably in the mouth. At least considering the price at around EUR 35 and a final rating saying 88 points.

Checking out the copycat – well not trying to resemble a Les Carmes Haut Brion but rather the Cheval Blanc which is the favourite wine of the owner at Tenuta di Trinoro. 2006 Le Cupole is an assemblage containing 47% Cabernet Franc, 30 % Cabernet Sauvignon, 13,5 % Merlot and the rest being Petit Verdot. 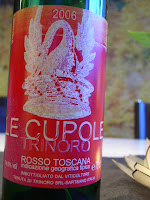 In The Wine Advocate #177, Antonio Galloni rated the wine a 90 and made the following comments: “The 2006 Le Cupole is an explosive wine. Ripe Fruit, crushed flowers, smoke and bacon fat emerge from this deep, richly flavoured wine. It is an unusually complex wine at this level.” Anticipated maturity: 2009-2014.

And it doesn’t stop there. In June 2008 D’Agata & Comparini gave the wine a 92 rating with the following comments: ”Andrea Franchetti, an enological genius” and “Le Cupole is amazingly rich in ripe fresh fruit and has to be considered a true masterpiece also in view of its fair price. You won’t find a better bottle of red wine anywhere.”

Besides being far from resembling a Cheval Blanc, or having it on the pedestal, it didn’t smell and taste like any other red wine! The strangest dominating scent of rhubarb I’ve ever felt in a red wine mixed with licorice tar and overripe sweet jammy plums and cherries. In the mouth overwhelmingly sweet with notes of spices, jammy fruit and high alcohol. In some bizarre strange way there is a kind of balance in it.

My pour so I knew what was in the glass but should I have guessed blindly I would have stayed with my prejudices and placed it as a South African Pinotage due to the wine’s burning bakelite smell. Not unpalatable but just a wine i have serious issues in drinking. Price? EUR 30!

The general judgement was also a wine very hard to like – at least if you’re gifted with a Scandinavian palate. For me the ratings on 90 and 92 points are very well illustrating how different we approaches wine and why it is so easy to question a judgment and if the wine reviewed is the very same i have in my glass. My score: a hesitating 85 points.

Sensmorale: Trust only your own palate and don’t drink points. Furthermore we have the same issue with Bordeaux as with Burgundy. It’s simply too easy to pay a lot of money for nothing. Stick with less famous chateau’s and give for example Lalande-de-Pomerol, Montagne-Saint Emilion and Cotes de Castillon a chance – if you’re not sure what you have in the bottle. And you get 2 for the same price as 1…. 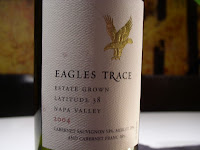 Thankfully Johan had brought the 2004 Eagles Trace Latitude 38 from Napa Valley to set us back on track again! With 53% Cabernet Sauvignon, 18% Cabernet Franc and the rest being Merlot he tricked some that placed the wine in Bordeaux.

Lovely floral note mixed with black currants, dark cherries, a touch of tar, wet earth and finely integrated barrique’s. Starting to indicate some maturity but this baby has plenty of life ahead. Still with loads of fruit, massive tannins, fine currant notes, a floral touch and expensive oak. Great balance and long finish.

When tasting wines like this I somehow regret a bit having concentrated so many years on buying Bordeaux. Not a cheap bottle – retailing around USD 95 – but put this next to a Bordeaux with the same price tag and a majority would have issues catching up. One of my very favourites and also a wine establishing that the best Bordeaux this evening came from Napa Valley (94 points)!