What's new:
You are at:Home»Portugal»Regions in Portugal»Douro»When the schist does the talking!
Tell me; what do you appreciate the most when it comes to your wine passion? For me there’s no doubt; the inexhaustible amount of new discoveries! I’ve been doing this for more than 15 years now and am still bumping into great producers I’ve never heard of before – in wine regions I thought I could consider myself somewhat of a specialist. Obviously I’m not….
In a constantly changing world of wine it’s impossible to keep fully updated. And even if you decide to become an expert within a specific field, you will probably not be able to keep track on what’s happening. For some it’s perhaps almost leaning towards resignation; ‘I will never fully learn’. Others realize this is exactly why wine is the most dynamic drink and why it constantly fascinates and captures our attention.

For a lesser known producer the situation is on the other hand not as romantic as I’ve just pictured it. Most are lacking capital to start a massive marketing campaign and are hence dependent on the good scores and being mentioned  at the right places. But sitting there, waiting on a nice review is not the way to walk. There are other possibilities; inexpensive one’s that can do the job if you’re patient enough.

I came in contact with André Marinho Pinto via Twitter earlier this summer. André runs the Douro property og Quinta do Judeu and it was great talking to him. I was introduced to Judeu and offered to taste his red and white wine from the vintage of 2008. With vines in Baixo Corgo and Cima Corgo he didn’t have to ask twice!

Having tasted the wines by now, Quinta do Judeu is one of those finds that just leaves a terroirist with a big smile. They are carefully treated with great respect for the Douro terroir which is amongst the most exciting in the wine world. No extreme oak treatment that I’ve otherwise found in many newer learning Douro properties, no ridicolously concentrated wines – just honest wines with a mineral feel to them.

As always when it comes to Douro the vineyards has reached impressive age. At the Quinta do Judeu Canelas, which is situated higher up than the Covelinhas, André gets the grapes for the property’s white wine. The topography, the schist soil and the vines which are up to 80 years old, enables Judeu to produce a great wine with lots of acidity.

Quinta do Judeu is part of a Brazilian holding group that is totally owned by André’s family. Beyond the Quinta do Judeu the holding group includes some real estate management and a crane rental company. The original Quinta do Judeu (Corgo) has been in the family’s ownership since 1932 and the property’s fame was related to a roman jew statue which were found at the estate. People without respect for others property obviously exist everywhere and the original statue was stolen some years ago. André however, ordered a new one made by a local artist.

Although in the family since 1932 the quinta was totally abandoned, and it was first in 2003, when recovered and modernized, the first vintage was released. The 2008 is their 6th vintage and it will first be on the market in the beginning of next year. The white 2008 is already released.

Tasting notes on the 2008 Quinta do Judeu wines 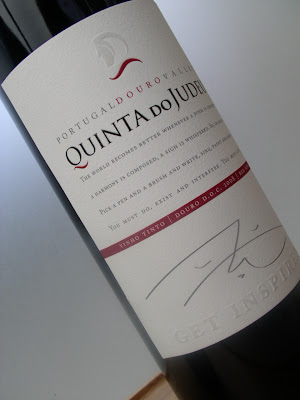 The tinto consists of more than 15 different varieties from old vines at the Covelinhas site. Most of the wine is Touriga Nacional, Touriga Franca, Tinta Roriz, Tinta Barroca, Tinto Cão, Tinta Amarela, Tinta Francisca and Sousão. Foot trodden in lagares – what else, we’re in Douro! After fermentation it was given 10 months in French oak barrels. Then 1 year in bottle.

Bottled in March 2010, it was given several hours on the decanter to get rid of the initial youth. Dark red color. Restrained aromas of dark cherries, licorice, violets, wet rocks and just gently used oak. Simply put; elegant nose and the origin can hardly be doubted.

On the palate it’s continuing where the nose left. Cherries, licorice, a great mineral feel, tar, violets and oak. Fruit, acidity and tannins in fine balance. No heavyweight but an elegant wine made to perform with food. Quite long, pure length. What I like with the tinto is it’s balance between modernization and tradition. You sense the origin but are free from the port wine associations that I feel haunt some more traditional Douro’s. Let’s meet again! (91 points) 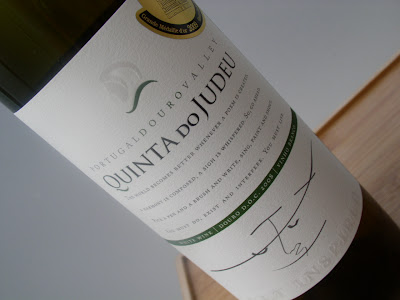 Well, hello there! This only took a sip to fall in love with! Grapes from the Canelas site where the vines, mainly Malvazia Fina and Rabigato, are extremely old for green grapes – around 80 years. Given just a month on French oak barriques.

Light color. Peachy with notes of hyacinth, wet rocks, lime peel and slightly tropical. Refreshing mouth feel and lovely balance between schisty mineral and mature yellow fruit. Just a hint of sweetness but the acidity is so refreshing that it never becomes annoying. Pure and good mineral feel in the aftertaste. Another terroirist wine! (90 points)

Both wines are worthy of cellaring – and in need of it as well. The red should probably benefit from three or four years in the cellar and keep for more than that. The white are beautiful already and your personal preferences decides cellaring or not. 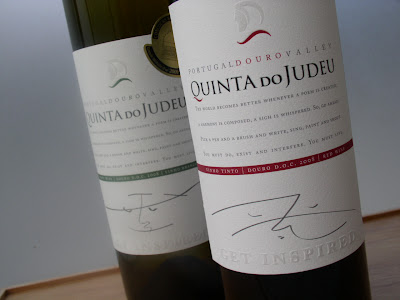 Where do you live? Quinta do Judeu’s wines can be found here; in Germany, Sweden (restaurants only), Poland, Austria, Portugal and Spain to mention a few.
Both wines generously provided as samples by André at Quinta do Judeu – a man probably quite busy with the harvest, or fermentation at the moment.
Pictures from the estate provided by André.
P.S. Follow Quinta do Judeu on their blog as well.

The site is experiencing technical difficulties.