What's new:
You are at:Home»Portugal»Regions in Portugal»Douro»Wine recommendation of the week: get to know yourself better!

Do you consider yourself a wine passionate? Even nerd perhaps? I’m both. A nerdy passionate. For many years I thought of myself as a Bordeaux freak placing the wines of the region highest up on the pedestal, from where it could look down at other wines trying to be just as grand. Sure, I had experiences from other regions as well, quite many actually, that reached the same level, but still it was Bordeaux on the top. Perhaps just plain laziness but rather it was the result of prejudice as well.

When starting to think what I perhaps liked most about Bordeaux and still do, I came down to especially one common denominator; modernly styled wines with classy but quite obvious oak to it. That could be anything but Bordeaux, right? I love the garagiste movement of Saint Emilion and Pomerol but that is not really what you’re supposed to be crazy about if you’re a BDX-freak. Or?Bordeaux fundamentalists don’t share my taste I guess but this is it; I like Michel Rolland-styled wines. For many wine lovers that is equal to being allied with the devil and many are those who would say I’m a victim of the globalization of wine. Well, what the heck if I am? It’s my taste and why am I supposed to quaff wines I don’t care about? There’s no right or wrong but it is too much judging what a wine nerd are supposed to like. Besides, judging wines heavy on the fruit and oak when young shows lack of respect for their potential to evolve and perhaps integrate the components over a decade. Perhaps even express origin with age?

Now, don’t read this like I ‘m an oak guy. A wine that is too generous with vanilla wood won’t make my top list. However, as long as all the components are in balance I don’t care whether a wine is fermented in new oak and then kept in new barriques as well. Balance. Basta. That’s it.It just took me an eternity to realize and accept my own preferences rule. There you have it; I’ve found myself and I wasn’t hiding behind the barrels – I was looking for them! The better you know yourself, the more you will be able to make good decisions in your life. 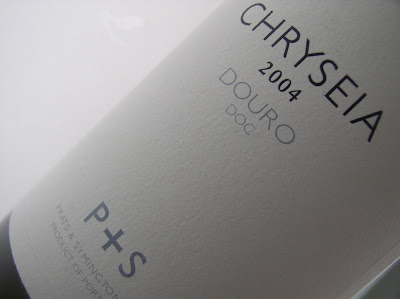 So, that was my opening lines. A bunch of crap, huh? Now let’s gently move on and head for Douro. The joint venture of Bruno Prats and the Symington family of the Douro Valley, Chryseia, is a perfect example of what I love in a wine! It is generous in its fruit appearance, backed up by 100 per cent new oak but still manages to express origin. And it evolves beautifully!

You’ve probably read it more than once by now. Bruno Prats, formerly Chateau Cos d’Estournel in Saint Estephe, sold the property in Bordeaux in the late 90’s to find new challenges. Chile and South Africa but also in the Douro Valley after having been approached by the Symington family. The joint venture P+S has resulted in Bordeaux know-how meeting the fortified masters of the Douro Valley – and together they’ve created a fantastic table wine from the very best quintas for vintage port. 2004 in Douro hasn’t been commending the consumers that’s for sure. A crazy year which for example resulted in hysterical amounts of rainfall in August followed by very hot weather with uninterupted sunshine for almost a month. Many wines I’ve had were stressed and green with unpolished tannins. Quite nice in their youth but age has been mean to many of them. The Chryseia is the opposite! Without doubt one of the best 2004’s I’ve had.The 2004 Chryseia was made from grapes picked at classic sites such as the Quinta da Vila Velha, Quinta do Bomfim, Quinta do Vesuvio and Quinta da Perdiz. Mainly a Touriga Nacional based wine (around 65 per cent) backed up by Touriga Franca, Tinta Roriz and Tinta Cao. Then raised in 100 per cent new expensive and delicious French oak. It is obvious the Chryseia team managed to pick grapes with high sugar levels and fine tannins.The wine has evolved beautifully with a wonderful berry sweetness to it with the typical mineral feel expression of Douro. Douro schist goes Mosel gas station if you get the paralell. Cherry nose, sweet licorice, tobacco, rocks, some flowers and toasty fine oak. Evolves during the evening.

On the palate it is perhaps even better. Fine, almost silky tannins but still with a good grip, mature sweet berries, tobacco, Christmas spices, grass, chocolate, vanilla and a touch of leather. Long, intense taste in fine balance.

Pour me this blind and I am not in 2004. Would I be in Douro? Think so, the shist would hopefully lead the way!