What's new:
You are at:Home»Germany»Regions in Germany»Ahr»Wow! Strawberries, yeah! Strawberries; not the cheese…
I could write a novel on this one – on the theme of pure seduction – but then a lot of what grabs you when drinking the Kreuzberg 2008 Devonschiefer Goldkapsel are lost. This talks directly to your heart and works extremely well with those moments when you get the feeling that life’s good, really darn good! 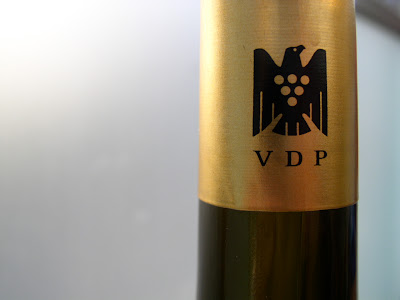 After some time on the decanter it shows an adorable ethereal and floral nose, totally impossible not to fall for! Funny, it actually reminds me of the just as great Waipara Pinot 2007 from Mountford Estate we had the week before. Especially the spiciness, sage brush/absinthe and curry, gives me flash backs to kiwi land! The spice notes are extremely modest but enhances the aromas and adds depth together with the minced strawberries and wet earth.

If the aromas spoke directly to the brain’s lust center the taste follows it up! Not for the tannin followers, this one rather appeals to acid freaks! The acidity takes you on a ride together with the ethereal feeling and delightful red fruit. Elegance in a glass simply!

I find myself liking the 2008’s Spätburgunder’s from German regions such as Ahr more than the rich 2007 style. Maybe it’s more drinkability at the moment or just the acid nut in me talking, I don’t know – but what I do know for certain is that if Pinot Noir is high up on your list then do whatever’s in your power to find some bottles from Kreuzberg! 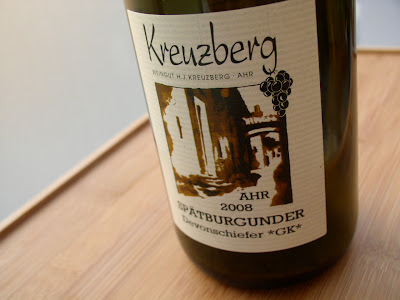 Living in Europe? Check out the German Winzers. They ship to many countries for most reasonable prices and stock a bunch of great producers!

P.S. Thought about naming this one ‘Po-n in a bottle’ but reconsidered when realizing I would be chocked when checking my stats – finding out I had tenfolded my readership. And just as disappointed finding out they were all gone with the next posting….

P.S.2. You guessed it. The title is Jack’s words (sideways). Although on a rosé it’s still fitting in…